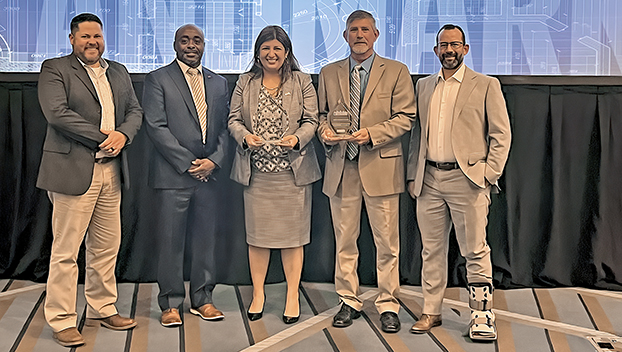 Port Arthur has always known the Ruby Fuller Education Annex on the campus of Lamar State College was something special.

Now, the rest of Texas knows, too.

The 107-year-old Fuller Building, which recently underwent a major renovation, has been awarded the Houston Business Journal’s Public Assembly Landmark Award for 2022.

“From the very beginning, when we were planning the Ruby Fuller project, we knew we had to preserve the character of this historic church,” LSCPA President Dr. Betty Reynard said.

“Between the developer, the contractor, the architect, the engineer, and our team here at the college, we were able to mesh contemporary with traditional and came away with a beautiful facility.”

Sigma Engineers served as the architect and engineer, while O’Donnell Snider Construction was the general contractor. Hill International developed the project.

The renovation maintained some of the core features of the original church while modernizing the interior to better serve students and staff into the future.

When construction began, the existing education annex behind the church was demolished and a new 4,700-square-foot, two-story meeting hall/education building was constructed adjacent to the sanctuary. The original brick, windows, stained glass and roof were restored to preserve the original appearance of the structure.

The Fuller Building is a historic structure that was Port Arthur’s first-ever First United Methodist Church, which celebrated its 100th year of existence in 2015.

The building’s namesake, Ruby Fuller, taught Sunday school for 42 of the 55 years that she was a member of FUMC.

The College came into possession of the building in 1976 and utilized the space for classrooms and faculty and staff offices until 2017 when Harvey’s impact made the building unusable.
The 86th Texas legislative session through SB 500 provided special appropriations of $6.32 million to LSCPA for property damage related to Hurricane Harvey.

The funding provided for a modern interior space with major repairs to the exterior of the building. An original classroom addition was removed, allowing for a grand secondary entrance to the building.

The building now serves as home to the College’s Title V Grant program, which focuses on encouraging and supporting the Hispanic student population.

Title V coaches and tutors are located in the facility as well as the Enrollment Services staff.

The college celebrated the re-opening of the building with a ribbon cutting in September 2021.