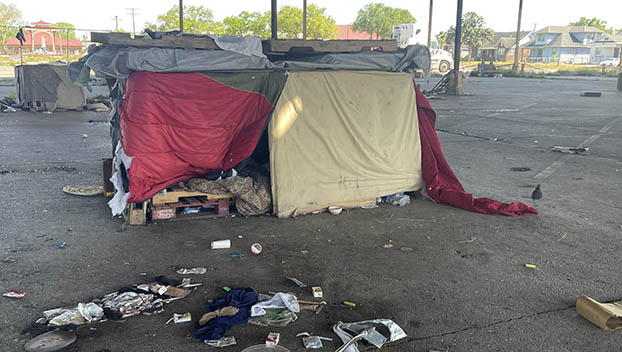 According to Mayor Thurman Bartie, the city has worked for years with no success to remedy to the homeless situation at 950 9th Avenue, due in large part to a lack of action from the land owner. (Monique Batson/The News)

Beginning today, Port Arthur officials will begin the process of clearing the homeless encampment located at 950 9th Avenue after a district court ordered the area be vacated.

“Contrary to what some out there say…they’re supposed to be gone,” he said, adding the court order was issued at 3:25 p.m. April 7 and the removal process could have started at 3:26 p.m. that day. “It was only a courtesy we extended telling them by this date.”

Bartie said the residents that live in the vicinity of the former Howard’s Discount Super Store are tired of the situation and have expressed gratitude towards the action.

“Its not a normal landlord-tenant situation,” he said. “We could have gone out the day the judge signed the order but we wanted to treat them, and the council agrees, with some form of dignity.”

The covered lot has been frequented by those experiencing homelessness since Howard’s closed in 1994.

Several residents on the grounds spoke this week with Port Arthur Newsmedia and said they’d better benefit from having the area cleaned and equipped with a dumpster and portable restroom to help ensure cleanliness.

Danny Washington, who has lived at the 9th Avenue site for more than a year, said he fears he will be unable to find housing after he lost his birth certificate, identification and other documentation when his tent caught fire during the winter. 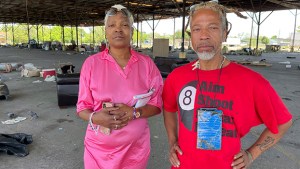 Washington said city officials had been on site this week to seemingly survey the partial fencing on the property.

No one, he added, had been by to discuss available resources or ways for residents to find shelter.

“We hope those folks try to seek shelter,” Bartie said. “All we can do is make they vacate that area.”

During last week’s news conference, the mayor said the city’s code enforcement department and police department would aid in the situation. Wednesday he clarified the statement, saying when code enforcement goes to the property they will have a police officer with them in case a person does not want to leave. The officer will, in turn, give out a trespass warning, which is a Class B misdemeanor that can include up to 180 days in jail.

Washington said he is prepared to be jailed, but will return as often as possible as he has no other place to stay.

Demolition set for Nederland homes, business as part of…