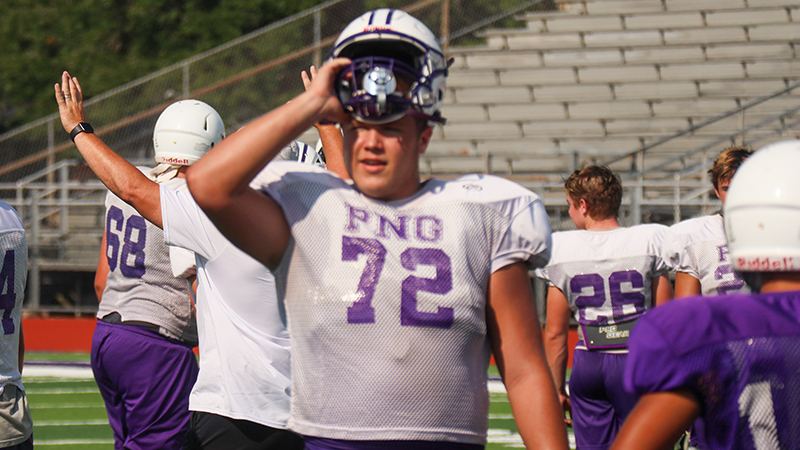 PORT NECHES — Jansen Ware is making quite the name for himself for his work on the football field.

At 6’4”, 260 lbs., the standout offensive lineman for Port Neches-Groves had an impressive showing at the district track and field meet last week. Ware finished first in shot put and third in discus.

This week, Ware along with several track and field teammates, will compete in the area meet with a chance to advance to regionals.

He also earned the bronze for his discus throw of 149’11.” Both were personal records for Ware.

The throws were quite the improvement for Ware, who did not make it out of district last year.

“I’ve practiced hard and it was a goal of mine to excel in the throwing events this year,” he said. “I felt very accomplished. I am super excited about the area track meet and what is coming next.”

Ware has been throwing shot and discus since middle school but said he only recently began taking it seriously.

“My goals are just to improve my distances,” he said. “I will do whatever it takes to win.”

His throws get better each week and he believes his best is yet to come.

Head Track and Field Coach David Wallace said Ware is a rare athlete, even with his hulking size.

“It kind of came out of nowhere,” Wallace said of Ware’s district performance. “He threw about 7 feet further than he had before. He is incredible. Any sport he would do, he would probably excel.”

Wallace said Ware is a mainstay at the top of leaderboards for the football offseason program.

“Whether it is running, lifting or whatever, he is an all-around athlete,” he said. “He is one of the best athletes we have, by far. For as big as he is, he can really move. It is crazy.”

Ware previously told Port Arthur Newsmedia he ran the 100m dash in middle school and recently clocked a 4.8 40-yard dash, which is well in range of “skill” players at the high school level.

“He could probably play a skill position if he weren’t a lineman,” Wallace said. “He could play anywhere.”

Wallace would not be surprised if Ware is able to throw for 50 feet or more in the area meet.

“I have a lot of confidence that he will perform well this week,” Wallace said. “I think he has a great chance to qualify for regionals. We will see.”

Ware will compete with the other field participants Thursday in the area meet at Barbers Hill.