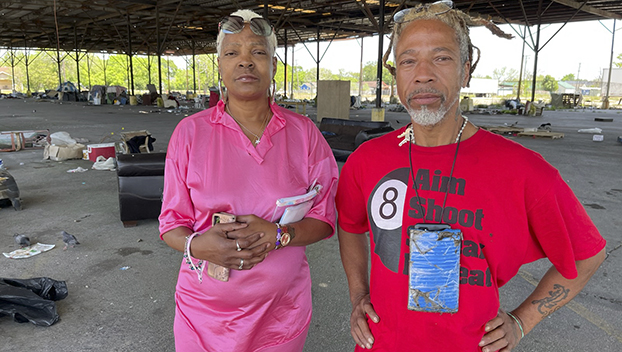 LaTonya Bryant hasn’t always been homeless. The 49-year-old woman remembers family vacations with her uncle, who worked for Howard’s Grocery Store and owned a beach house in Sabine Pass.

“That was our getaway time — Fourth of July, any other family days with kids, Easter egg hunts,” she said.

Her life is still intertwined with Howard’s, only now it’s as a resident with her brother at the homeless encampment under the 9th Avenue pavilion beside what was once the grocery store.

For years Bryant suffered from physical disabilities and mental illness. However, the latter was exacerbated with the 2015 death of her son.

Denzel Jervon Washington was 25 when he was found dead in his vehicle in the 3400 block of 15th Street, according to previous reports from The Port Arthur News.

His killer, Jose Julio Esquivel, had been on a crime spree that started the previous day with a burglary on Rosedale Drive. It was there he would take a gun later tied to the death of two men, including Washington, who picked Esquivel up before he was shot twice in the head and left in his car.

Esquivel, of Mexico, was sentenced to 40 years in prison. He is currently at the Ferguson Unit in Midway, Texas, with a parole review date scheduled for 2035.

His shelter is guaranteed, unlike that of his victim’s family.

“It contributed more to my mental health,” Bryant said. “(My son was) all I had. My son was so brutally murdered…”

While Bryant often stays at other locations, her brother Danny Washington has made the encampment at 950 9th Ave. his home for more than one year.

Leaving seems impossible, after several months ago his tent caught fire, destroying all of his personal documents and leaving him with serious injuries.

“We were trying to keep warm in the winter time, and the fire got hold of my curtains and burned my tent down,” he said. “It burned my feet real bad, and I had to get rushed to Galveston. When I got back, the firemen that put out the fire donated us a tent to replace the one that I lost, and I appreciate that.”

First responders from the city have been known to visit the area and bring items of assistance, he said Monday.

“The police came here just day before yesterday and brought us plate lunches,” he said.

The same department has been charged with evacuating the encampment by Thursday. 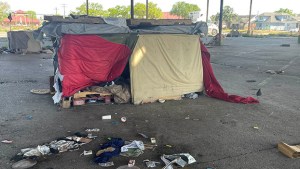 According to Mayor Thurman Bartie, the city has worked for years with no success to remedy to the homeless situation at 950 9th Avenue, due in large part to a lack of action from the land owner. (Monique Batson/The News)

It is, he said, something he can’t stop.

The judgment from Judge Justin Sanderson’s court was passed down two weeks after Bartie announced the formation of the Port Arthur Coalition for Homeless Advisory Board — 14 residents chosen by council members to serve two-year terms working with various government and local organizations to assist people experiencing homelessness.

The announcement of the two events, the mayor said, was coincidence.

“We’ve been getting complaints for a number of years from those who live in the area,” he said. “We could not get the property owner to cooperate.”

According to the Jefferson County Appraisal District, the area known as the Howard’s Pavilion is now owned by Houston-based Dannett Inc.

COVID-19 delaying court hearings, Bartie said, resulted in the ruling coming now instead of years ago.

Beginning this week, Port Arthur Police Department officers will be evacuating residents. Afterward, the area will be cleaned.

That, however, is something residents believe would help the situation and not require their removal.

“A lot of people recognize this place as a homeless shelter and they bring a lot of donations — food, clothing and stuff to help us out,” Washington said, saying there are about eight permanent residents with four more that stay on occasion. Some park their vehicle on the property to sleep. “The city comes every week with the little cranes and they pick trash up on the side of the road. With some of that tax money, they could at least donate a dumpster and maybe a (portable restroom), maybe clean it up one time. And if we have no place to put the trash, we can’t do anything but put it here.”

Ben Hanna, of Helping Other People (H.O.P.) Ministry, said cleaning the area would be more beneficial than evacuation.

“Cleaning this up is the best thing they can do, but kicking them out is not,” said Hanna, who was at the site Monday. “If they were to clean it up and the people that stay here would keep it clean, then they probably wouldn’t bother them anymore.”

Hanna said that’s how the situation was handled at his last home in California, from which he moved about one year ago.

Since arriving in Southeast Texas, he has worked with two Mid County churches to assist those in the area.

“We do a Wednesday ministry here and try to feed the homeless,” he said. “On Saturday we come in with what they call a Night Strike, and we set up at 7 o’clock at night and do a service, a meal, give out clothes, stuff like that.  We give them a ride to probation or stuff like that. We try to help how we can.”

Bartie said he had also heard from those suggesting the encampment be cleaned and the residents be allowed to remain on site.

“Those options are out the window right now because a judge issued an injunction that the property has to be evacuated and cleaned,” he said.

After the area is cleared this week, he said, anyone who returns will be issued a citation for trespassing.

Washington said he’s prepared to be taken to jail, but intends to return.

Bartie said the city would be soliciting bids to erect a fence around the property.

RELATED: Read more about the order to evacuate the property