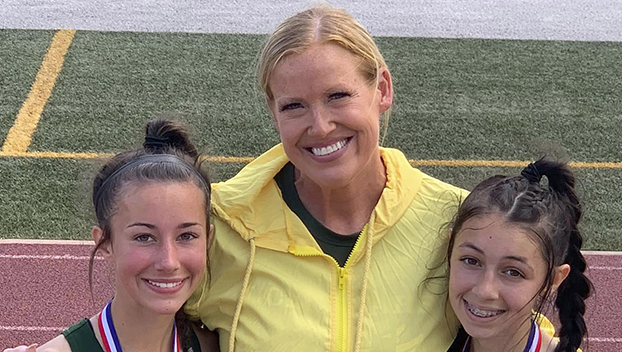 LITTLE CYPRESS — It certainly has been a change of pace for the Little Cypress-Mauriceville girls track team this season.

For the past several years and almost a decade, the Lady Bears have been near or at the bottom of the team standings at the District Track & Field Championships.

The sport of track was basically an afterthought, except for a select few.

Well, that is changing and changing drastically this season. The Lady Bears have surged forward for first-year head coach Becca Peveto.

The Lady Bears jumped, tossed and ran their way to 111 points to earn second place at the District 22-4A Track & Field Championships last week, finishing only behind five-time straight district champion Bridge City.

LC-M is sending seven athletes in individual events, along with their 1,600-meter relay team, to the Area Meet this Thursday in Huffman.

That’s quite a haul, considering the Lady Bears had approximately eight students on the entire track roster last season.

“It’s been so awesome to work with these kids this year,” Peveto said. “They all have so much passion for the sport. I was a little worried when I came here and found out how few kids came out for track. But we’ve managed, with a lot of support, to get kids out here and to have fun. We have close to 30 on the roster, and you’ve got to love it.”

One of the biggest challenges going into this school year was talking kids into playing more than just one sport. Track is a sport that can keep kids in shape for whatever other sport they are involved in.

“Growing up, you never hardly heard of anyone specializing in one particular sport,” said Peveto, who was the long-time volleyball coach at Bridge City and coached track at the junior high level at BCJH before moving over to coach at LC-M.

“Almost all of us grew up playing two, three and even sometimes four sports. The key was getting the kids out and getting them to believe in themselves that they can compete with anybody.”

Another key was working with other coaches to get all of the kids involved in multiple sports. The Lady Bears soccer team has been stout for years, but very seldom did LC-M have any crossover from soccer, basketball and volleyball that led to track success.

“I worked with our soccer coach, Lauren Martin, when we were both at Bridge City and we established a great connection,” Peveto said. “Lauren loves track and ran it when she was in school. We have about five soccer players that are in track this season and that’s been a big plus.”

Peveto is also thrilled about the support the kids get from above, from Athletic Director Eric Peevey and even high school Principal Ryan DuBose.

“Coach Peevey has always been a ‘track guy’ and he’s at every meet pumping up the kids and giving out high-fives,” Peveto said. “DuBose is just the same and he was a ‘track guy’ when he competed for Orangefield back in the day. He’s always cheering us on and is always there at the finish line.”

Now the Lady Bears are honing in on the Area Meet Thursday and will look to make a dent into the competition to qualify for the Class 4A Region III Track & Field Championships April 29-30 in Webster.

The top four finishers in each event Thursday advance to Regionals.

For the Lady Bears, standout distance runner Annabelle Fisher in the 3,200 and 1,600 meters and shot putter Chrissy Joseph have been among the Southeast Texas leaders all season in their respective events.

DeAsia Tippins has been such a spark and will head to the Area Meet qualifying in the 100-meter and 300-meter hurdles, as well as the long jump. Another Lady Bears standout who has improved leaps and bounds throughout this season in 3,200 and 1,600-meter runner Taylor Bull.

“I don’t want to make them nervous or anything, but they have a great shot to move on to Regionals,” said Peveto. “I’ve seen them all grow in confidence each and every meet. They all support each other in everything they do. A lot of people think track is a tough sport with all of that running and stuff, but it’s not like that. We have a blast out here, and the kids realize how much fun it can be. It’s paid off this year and I really believe the program can keep on growing as we move forward.”