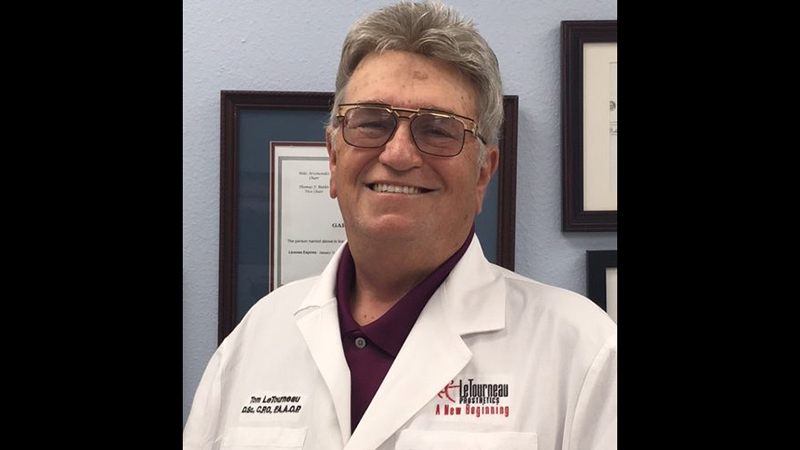 Tom LeTourneau has been in the prosthetic business for more than 50 years. (Courtesy Photo)

“I got started as a cleanup boy,” he said. “I went to college to be a technician. I eventually completed my college work and certificate work and became a practitioner and have been doing it ever since.”

LeTourneau said one of the reasons he went into prosthetics was his grandmother.

“My grandmother lost both of her hands to diabetes,” he said. “She never received prosthetics. She died. That was back in the 50s. Back then, the survival rate was pretty low. I think that was a driving force.”

LeTourneau said his company being relatively small and family owned gave it flexibility and agility, allowing him to take risks that ultimately paid off.

“The internet wasn’t really coming around until the early 90s,” he said. “In 1992, we had our website up and we were only about one of three that had a website at the time. It was pretty static. We didn’t have much on it but it was something. I received calls from Hollywood and other places that wanted information on prosthetics because it was pretty skimpy.”

In the late 90s, LeTourneau got a call from people at The History Channel, who were doing a show about the truth behind science fiction. At the time, LeTourneau was working with the first “intelligent prosthetic” on a local patient.

“We were putting one on a deputy from Chambers County,” LeTourneau said. “They wanted to show what science fiction thought robotic technology was versus the reality. From there, we received a lot of publicity.”

The publicity helped grow LeTourneau’s Prosthetics to 13 offices from Louisiana to Houston, where he had five offices.

The founder said he was able to get the intelligent prosthetic first because he didn’t have a large board or committee to go through with his company.

“The intelligent prosthetic was developed in Japan,” he said. “We have always been a pace setter in that fashion and willing to go out on a limb and try things… We do not have all the money that large companies have for marketing. We think it is a rather large accomplishment that we were able get publicity from large news agencies when large corporations weren’t. When you are small, you can make decisions. If they fail, they fail. If they succeed, they succeed. It is a large step to make those decisions. We didn’t have a committee so we could be more nimble.

One of LeTourneau’s most memorable clients was a woman from Port Arthur.

“She was in a Houston hospital because she had abscess tooth,” he said. “She went septic and lost both hands, her left leg and her right foot. They had put hooks on her. Obviously, if you pass out at home and wake up in the hospital with hooks on, it is not good. We were able to make her arms that look like her sister’s hands, actually. We were able to make them where they would open and close on thought process.”

Shortly after, LeTourneau was the first served a congenital patient that was born without a thumb.

“We were able to fit him with a prosthetic that opened and closed on thought process,” LeTourneau said. “That was featured in international news.”

“We had the second in command from Hamas want to come in and have our prosthetic for above-knee amputees. He had lost his legs when the Israelis had blown up his house trying to assassinate him. He wanted to come into Houston and have legs made.”

LeTourneau said his son, who was also his business partner died 13 years ago, which drove the founder to sell the company. After taking it back, LeTourneau now has three offices located in Nederland, Beaumont and Jasper.

“When he passed away, it was pretty devastating,” he said. “I didn’t have the drive I used to have and sold the business to a firm out of the east coast. Unfortunately, they came to Texas with the idea that they were going to teach Texas how they do it on the east coast. That did not work and I took the business back… We have retained family ownership since. My granddaughters work in it. My daughter works in it and my wife. My 7-year-old great granddaughter comes in every once in a while and I gave her the title of Vice President of Smiles.

“I personally believe that the value of family ownership is important to the people we serve. We are not some unknown entity or some big corporation traded on the New York Stock Exchange. We deal directly with the community.”

S.A.L.T. to use Environmental Champions grant to clean up…