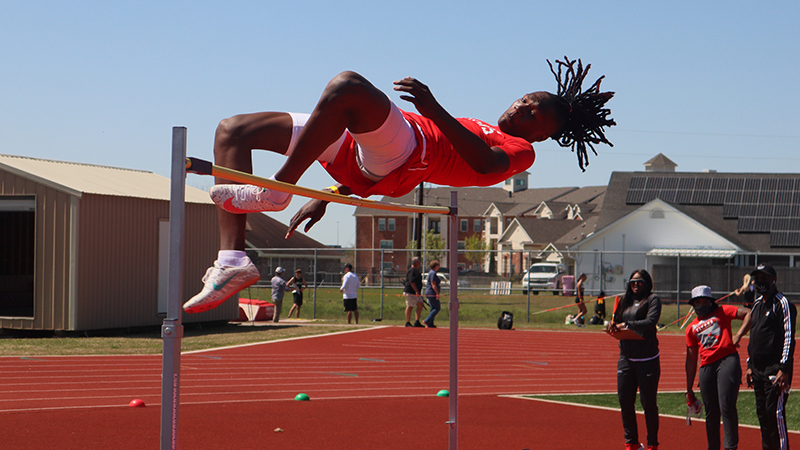 Athletes from Memorial, Nederland and Port Neches-Groves performed well at the District 21-5A track and field meet at Barbers Hill High School this week. The top-four performers in each category advance to the area round.

Memorial’s boys team came in second overall behind Barbers Hill, while Nederland and PNG came in third and fourth, respectively.

On the girls’ side, Nederland earned second place ahead of Memorial and PNG. Barbers Hill finished first.

“They did exactly what I expected us to do,” Memorial Track Coach Darrell Granger said. “Being the runners up, we thought Barbers Hill would win because of the numbers they had. Our kids competed well and they showed up.”

Memorial’s Erial Fontenot finished in first place on the girls’ side for the 100-meter dash. Ilijah Williams finished first in the 200-meter dash.

Nederland and PNG earned first and second, respectively in the 4×400 girls relay.

“A lot of the kids got PRs in their races,” Granger said. “They are performing well at the right time. The girls did really well. They have bought in to what is going on. Those 4×100 and 4×200 times are heading in the right direction. Fontenot did well in the 200 meters and Xiaorong Jones did good in the 400.”

“We had a couple of handoffs that weren’t great,” Nederland Track Coach Allie Crommett said of her relay teams. “We can still shave some time off there. Overall, we were really pleased how our kids performed. They showed up and really took advantage of the weather. We left happy.”

PNG’s Cyrus Jacobs Jr. had an impressive day, finishing first in the 800-meter run, 400-meter dash and third in the 200-meter dash.

The schools will meet at Barbers Hill again Thursday as District 22-5A joins them for the area meet.