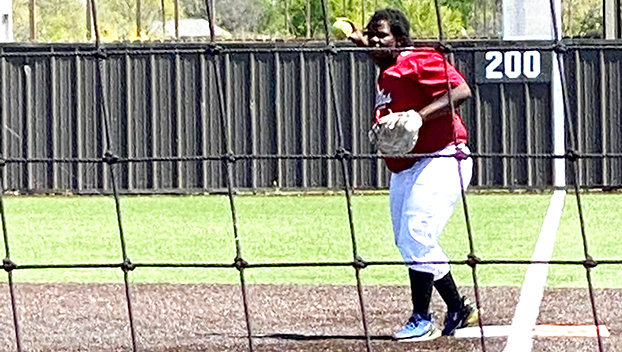 Rhionnon Weatherly was 11 when I first met her family. Raised in Port Arthur, Rhionnon had always been athletic, participating in basketball and track. But it was at 11 that she decided to try softball. But Port Arthur did not have a city softball league, so she joined the Port Neches-Groves Softball League.

We had one large thing in common: neither of us knew much about softball. I had come in the year prior when asked to coach because my daughter played. Prior to the time she signed up, I didn’t even know softballs were yellow. With the help (so much help) of incredible assistants, I coached five years before my child aged out at 14U.

Rhionnon joined the spring of our first 12U season. And immediately she was the ideal teammate. She rarely spoke, except to say, “yes ma’am.” If you asked her to do something, she was going to do it. Her eyes never left the game, whether she was on base or watching from the dugout.

Even with no knowledge of softball, Rhionnon could throw a ball from one side of the field to the other. She started on first base, where her mother played as a teenager. She struggled to make contact with the bat, but Rhionnon wasn’t someone who backed away from a challenge.

During practice, she concentrated on every move. She took every suggestion as if it were written in stone. She would eventually start working with a batting coach in her free time. And the first time she put her power and knowledge behind that bat, she missed her first homerun by inches.

It’s a game no one in attendance would forget.

Over the next few seasons, Rhionnon committed to softball in every way possible. The quiet, shy child became one of the first to cheer for her teammates. She would stand by the door of the dugout to greet every batter on their way back in, whether they were returning on a run or a strikeout. And even when we lost, she had the biggest smile.

Looking back, I don’t remember any of our season averages. I couldn’t tell you which games we won or lost, with the exception of a select few.

But I can tell you how each child improved. I can describe the way they smiled and laughed, and the way they playfully picked on each other as they grew closer.

I remember the few moments of drama that come from having 12 teenage girls together for hours on weeknights, followed by weekend tournaments from 7 a.m. to 10 p.m.

I remember the way they would call timeout and rally together on the mound, each becoming a leader when the rest needed it.

And I remember the players-versus-parents ragball games we’d play for practice, where I truly got to show off how terrible I was at sports. We would play and laugh for hours.

While I followed my daughter out of the game after our first season of 14U, I continued to keep up with the girls from our league, as most played softball in high school.

And when Rhionnon made the Kelly High School softball team, my daughter and I drove out to Orange County to watch one of her games.

Gone was the girl who knew nothing about softball. Instead, we were watching the athlete who would later earn a full scholarship to play at Dallas Christian College (and bring me to tears of joy on the day she signed).

Rhionnon’s jersey number was 42 every season she played for PNGSL. Now, in college, she wears 24.

Rhionnon, the once shy and quiet child, is described in a recent article on the school’s website recapping the game.

“Game one was all about Rhionnon Weatherly. The freshman out of Port Arthur, Texas, smoked the program’s first grand slam toward right-center field in the third inning to cap a six-run frame. This opened a 7-1 advantage that would be enough to give the team a win. The Royals did find runs in the sixth and seventh, but Weatherly’s first career blast was the difference.”

Being a little league coach was one of the best experiences of my life. I went in thinking I would play a part in shaping young athletes. Instead, young athletes taught me the meaning of strength and determination.

JODY HOLTON — Consistent exercising has benefit for your…