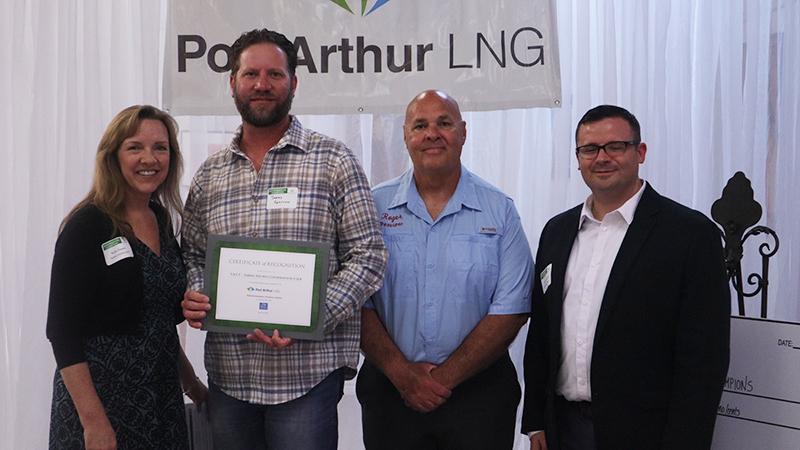 The Saltwater Anglers League of Texas (S.A.L.T.) is the oldest saltwater fishing club in the state.

The group hosts tournaments each year. Along with fishing, one of the organization’s passions is making sure the environment is clean for wildlife and anglers.

S.A.L.T. Treasurer Roger Bertrand said the grant would be used to help clean up the north levee on Sabine Pass, as well as add flag poles to the club’s building location.

The club meets monthly and features guest speakers often from Parks and Wildlife and game wardens.

Rogers said the club gave away six lifetime fishing licenses last year and hopes to up the mark to 10 this year.

“What we hope to do and what we will do is yet to be seen,” he said. “We do full-page and half-page ads in our program book and print 500 of those. Everyone that enters the tournament gets a program, and we leave them at the different sponsors to pass out.”

“You can start fishing at 5 p.m. Friday,” he said. “We have our first weigh-in Saturday and final weigh-in Sunday. Every kid that weighs in a fish is eligible for a lifetime fishing licenses drawing. All they have to do is catch fish or crabs and come to the weigh-in.”

Rogers said the grant will go towards cleanup days that are yet to be determined.

“The north levee is the worst,” he said.

“If people won’t walk 10 feet to put something in trash can, what is going to make them put it in a dumpster? If nothing else, we can pay people to go out and do clean up. The city doesn’t have funds for that. There is so much trash out there. Nobody likes to take their trash with them. Some people bring their trash and dump it out there. You can find tires, and we have found washing machines. It is just aggravating. We try to do what we can.”

Ronnie Moon, who is a retired Veteran, has turned cleaning up the island and the levees into a passion project. He is eager to sit and talk with members of S.A.L.T. about potential ideas.

“There is a board meeting next Tuesday and I am going to make a few suggestions,” he said. “I love this island. I have been fishing and participating in the island for 50 years. I just see little things that need to be done.”

Moon wants people to be more conscientious as more anglers gear up for summer.

“With this time of year, people are worse about leaving their trash,” he said. “In the winter, we don’t have as bad of a problem. We are getting ready to get into the season where it is going to get bad.”