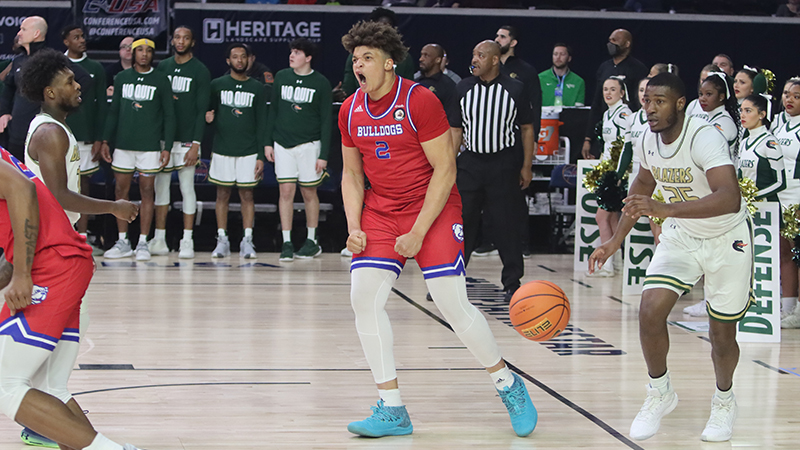 Kenneth Lofton Jr. celebrates after making a basket in March during a Conference USA tournament game. (Michael Sudhalter/ Special to The News)

Lofton announced in March he was declaring for the draft following two seasons at Louisiana Tech University. In his announcement, he said he would be maintaining his college eligibility in the process.

Over the weekend, Lofton retweeted multiple reports that he is also looking to enter the transfer portal and play for another college next season.

Lofton averaged 16.5 points and 10.5 rebounds per game this past season.

Memorial Head Coach Alden Lewis said he still talks to Lofton frequently and is rooting for his former player.

“He is a national name now,” Lewis said. “He has had a lot of growth over the last three or four years. Those years have been tremendous for him. He has done well on the court. That has gotten him to this point of potentially being in the NBA draft or going to a bigger school and bigger conference. He has put himself in a good position for his future. I think he is only going to get better from here on out.”

Lewis said the sky is the limit for Lofton, in part, because of his confidence.

Lewis has talked to Lofton a few times since the season ended and has given him some advice for handling his next steps.

“He keeps me up-to-date,” he said. “He drops by when he is in town to get a workout in. I offer any advice I can give him. I just tell him that he is a young man and all kinds of people are going to be in his ear. I tell him to just listen to the right people and stay away from the wrong people. He has a good family and support system.”

Lewis said he will be watching regardless of whether Lofton is playing in the NBA or for another college team next season.