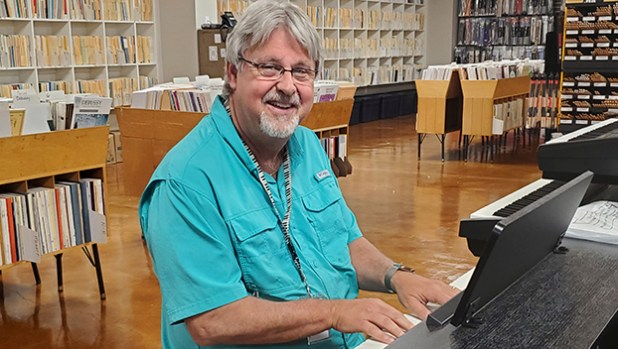 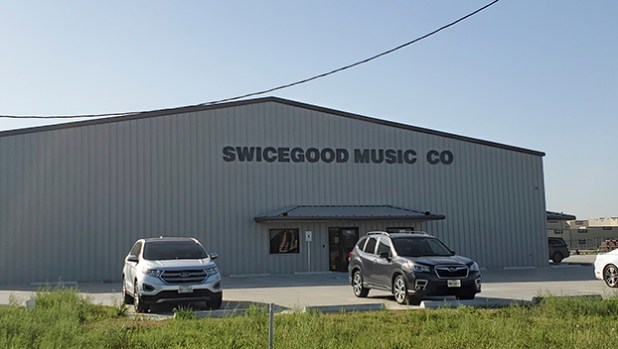 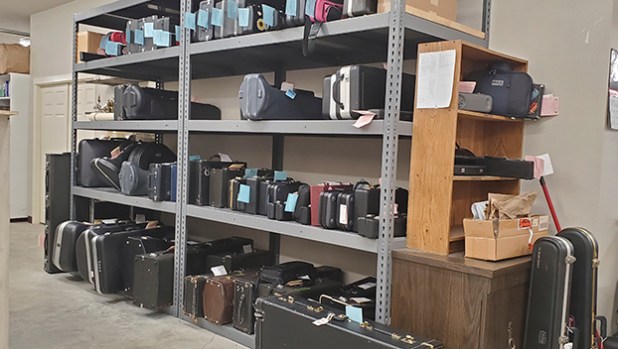 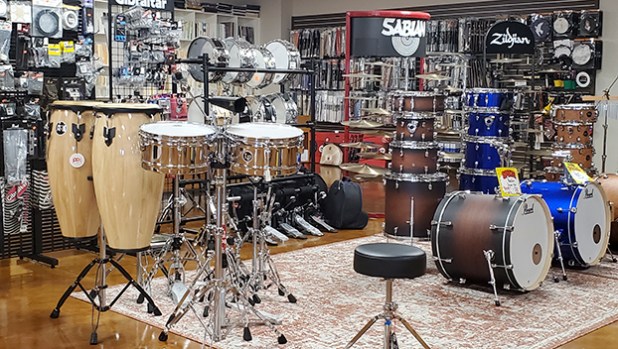 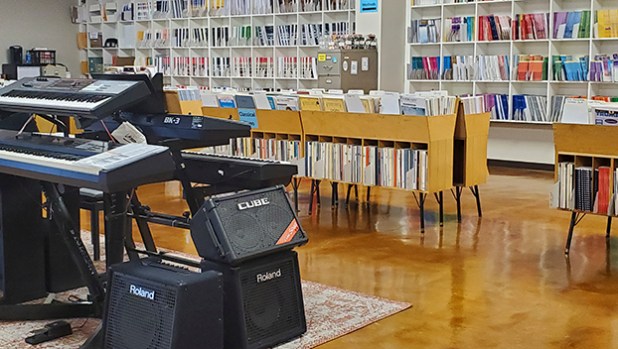 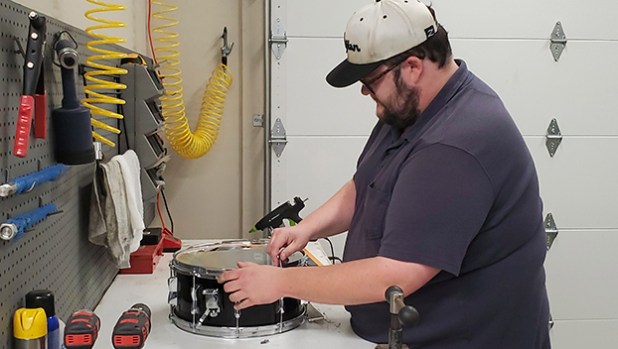 Jake Hollier works on a drum in the repair area. (Mary Meaux/The News) 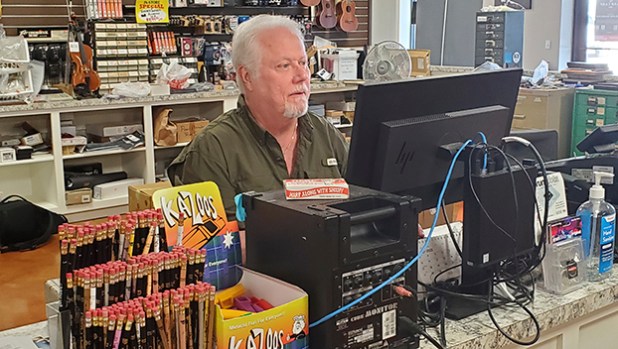 NEDERLAND — Swicegood Music Company may not get a lot of foot traffic at it headquarters, but its customers span approximately 30 school districts statewide.

And that’s just a portion of the business.

Besides carrying a full line of band and orchestra instruments, Swicegood has sheet music, band accessories and full service repair.

There’s a lot of history

Walking past musical accessories, past the drum sets and keyboards and neat walls of music books, owner Kurt Killion enters his office.

Killion and business partner Dan Veen acquired the business in 2003, but its origins go back decades.

Killion explained the original owner was Roy Swicegood. Roy was band director at Stephen F. Austin University in Nacogdoches. A man named Alto Tatum had opened Tatum Music in Longview and helped Swicegood get his start in the area in 1953.

Roy retired in the early 1970s and Tatum and partners bought it. One of those owners was Leo Stevens, who owned Swicegood until 2003. It then changed owners to Killion and Veen, with Veen retiring in 2015.

The music store has had locations in downtown Beaumont as well as Port Arthur; 710 9th Ave. and 3315 Twin City Highway in Jefferson City Shopping Center.

Music is in his soul

Killion is a longtime musician and a former band director, so the decision to become owner of Swicegood was an easy one.

“I’ve been in music my whole life,” Killion said. “The ability to stay in that scene or in that setting and know that down the line I would have the opportunity to own a business and all the perks that came with it … being my own boss.”

Killion employees 18 people, three of whom take care of outsides sales, traveling from Houston to Crosby to Humble to Livingston, all the way to West Sabine, Pineland, Hemphill to the state line, he said.

The repair side of the business does get walk-in customers, but most everything else goes through the road guys, as he called the outside sales personnel.

Educator-wise, Killion began his career as a band director at Thomas Jefferson High School, working under Herb Germer, then at Thomas Edison Junior High with Mike Monzingo. He also taught in Nederland for eight years.

And when he’s not running the business he’s playing with the band, Eazy.

Killion said their previous location on College Street was in a 60-year-old building. Through the years the neighborhood grew, businesses were added up and down the road.

In 2019 the store was flooded with a foot of water during Hurricane Imelda. He had flood insurance and soon saw walls and carpet being pulled out and remediation made.

“It was just nasty,” he said of the damage.

But he was back in operation as soon as possible to get back to serving the needs of his customers.

But after a while the location didn’t fit his business model.

With renewed interest in this part of Beaumont, he began getting calls from people interested in buying his property but turned them down for a while.

He spoke with a friend who’s a commercial Realtor and began looking for a new business home with no luck until the friend asked about his thoughts of moving to Mid County.

Since then he’s noticed more customers from Mid and South County.

The busiest times of the year are from June to the end of September, he said adding the majority of repairs are done in the summer and many of the sales are August to September.

Employee Kathy Hollier Rodgers, retired choir director from Groves Middle School, is a familiar name in the area. She retired in May 2020 after nearly 30 years as an educator but didn’t stay retired for long.

As soon as she learned of an opening at Swicegood, she applied and was hired. That was two years ago.

“I was off a summer and went back to work. It’s fun. I’m surrounded by music all day,” Rodgers said as she gestured with her arms, noting the wall of music.

She dropped the tone of her voice to a more serious note.

“And I have a lot of respect for Kurt because he does this because he loves this,” she said. “He does it to support the schools and music in schools. I think that’s the most unique thing about this store, his love for the schools and the support of them.”