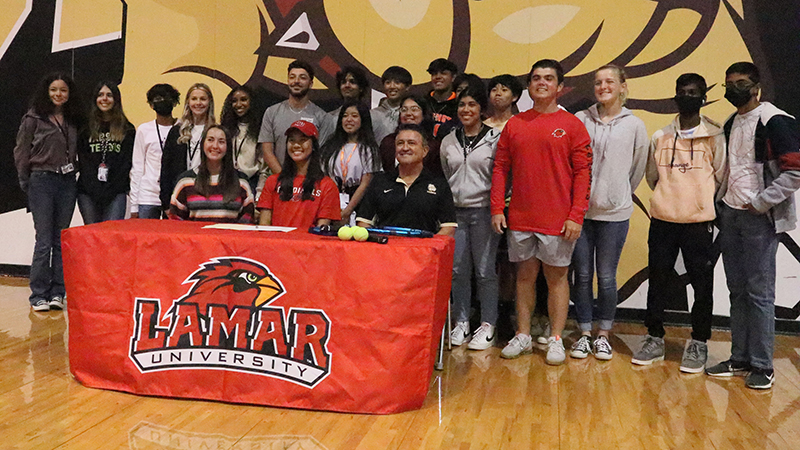 NEDERLAND — Four tennis players from Nederland and Port Neches-Groves are moving on to regionals after placing at the district tournament.

Nederland’s Aaron Berry and Megan Do each won the singles title for the second consecutive year.

Bulldogs Cassidy Venable placed second in the girls singles after losing to Do in the final match. Nederland came in second overall in the tournament behind Barbers Hill. The top two in each category advance to regionals.

PNG’s Diana Tran earned third place in the singles competition and will be an alternate for the regional round.

Berry said he is happy to play at regionals.

Berry said his main goal is to make it further than last year, where he lost in the first round of the regional tournament.

“I think we have improved this year,” Nederland Coach Jorge Lopez said. “Something a lot of people didn’t know was out of 21 kids on varsity, we had 14 sophomores and freshmen. We were very, very young. We are losing our top three boys and our top three girls and that is going to hurt. They have done a lot of hard work with the young ones.”

Lopez said his underclassmen did well battling against upperclassmen from other schools. He is proud of the three Bulldogs who will move on to the regional round.

“I was hoping for a little more, to tell you the truth,” he said. “We had worked really hard, but it just didn’t work out that way. Some years, it is up and down, but I am proud of the ones that advanced. They worked very hard and they deserve it.”

Do is expected to be the favorite to win regionals after coming in second in the state finals last year. The senior signed a letter of intent to play tennis for Lamar University this week.

Lopez said Do will not have the element of surprise like she did in her junior season.

Her play this year, along with her accomplishments last year, will likely make her the No. 1 seed heading into the regional tournament.

Berry said he is fortunate to be with a program that has such high standards.

“It feels good to be with a program, where you know you have one of the best teams in the area,” he said.

The seeding meeting will be April 12, with the tournament being played April 13-14. The top regional performers will move on to the state competition in May.