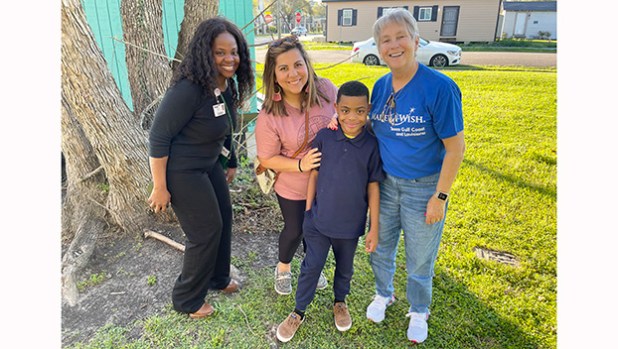 From left: Aries Milo, Wish Granter Alix Landry, Karson Romar and Wish Granter Tamra Strano met at Karson’s Snack Shack, where the child made a list of possible wishes he wanted from the Make a Wish Foundation. (Monique Batson/The News) 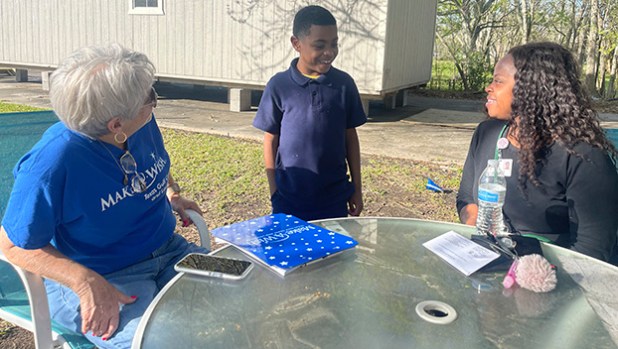 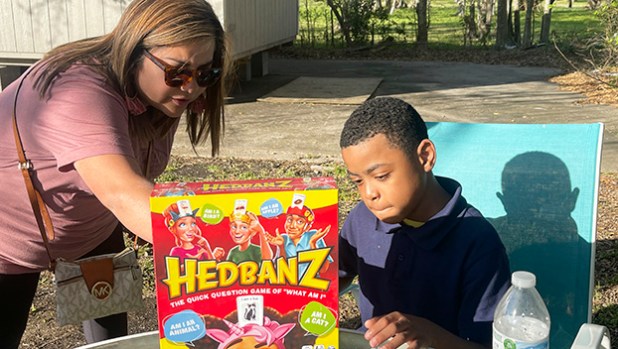 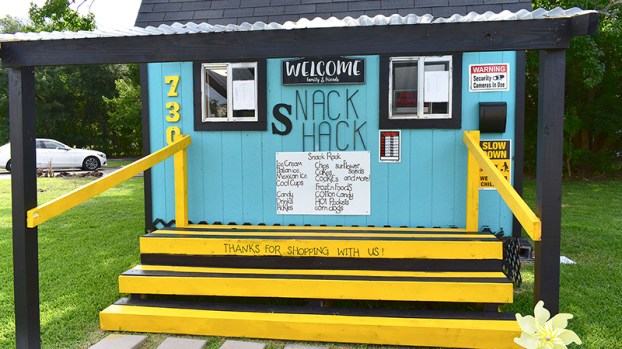 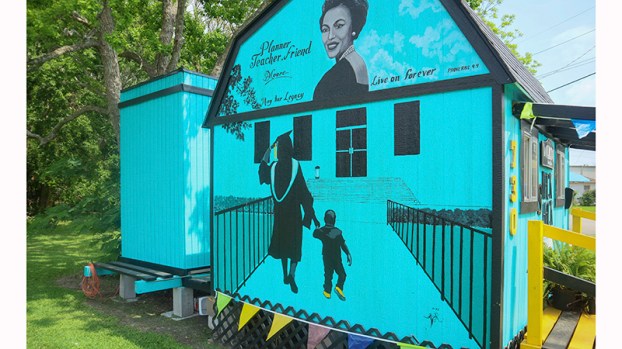 Aries Milo had a mural of Inell Moore put on the side of her son’s small business, Karson’s Snack Shack. (Chris Moore/The News)

Karson Romar only has half a heart, but it’s bigger than that of most 8-year-old children.

On Thursday, the kind, polite “owner” of Karson’s Snack Shack said he had recently made the A-B Honor Roll at Travis Elementary School. But he was upset because it would have been the A Honor Roll had it not been for a “B” in social studies.

He was sitting at the brightly colored patio area of the W. 10th Street business with his mother, Aries Milo, to meet with representatives of the Make a Wish foundation. But he was having difficulty deciding on one.

“I don’t think he really understands what it is,” Milo said.

The child previously suggested a trip to Paris, France, to see the Eiffel Tower, but then decided he didn’t want to waste his wish on that.

Milo suggested they meet Beyoncé, but her son was quick to remind her whose wish that truly was.

Ultimately, he just wanted a puppy.

“What else do I need?” he told his mother. “I have everything I want.”

Romar is one of the estimated 1,025 babies born in the U.S. each year with hypoplastic left heart syndrome.

“It just basically means he was born with a broken heart,” Milo said. “So he only has one side of his heart, and that’s the right side. And the right side has to do all of the work for the left side.”

He’s had more surgeries than birthdays, the first being immediately after he was born at the former St. Mary’s Hospital in Port Arthur.

Born by a caesarean delivery, Romar was rushed from Port Arthur to Texas Children’s Hospital in Houston. His mother was left behind to recover.

She had a fever and a fresh incision from a major surgery, but she had no intention of staying in that hospital.

She was told she’d be discharged if she promised to take her antibiotics and rest.

“I didn’t hear any of that,” she said. “I went straight to Houston. If I had pain, I don’t remember it. I was just focused on getting to my baby.”

Romar was also recovering from surgery. However, in order to allow for swelling to go down, his incision site had not been closed.

“I literally saw his heart beating outside his chest,” Milo said.

Earlier in his life, Romar didn’t understand why he couldn’t play like other children. But he’s since changed his outlook.

“I’m trying to teach him to be proud of the way he was born,” Milo said. “You only get one you. So far he’s been cool with it. He shows the kids his scar. It’s a cool thing now, not something sad. And he loves sharing his story, but I can tell sometimes he’s sad that he can’t do everything that other kids do. But I try to keep his life as normal as possible.”

It was the reason behind opening Karson’s Snack Shack. Even after an ultimate heart transplant, Romar will not be able to work. And if he does, it will be in a limited capacity. So the colorful spot across from Lincoln Middle School serves as a way for him to achieve employment. He’s learning early.

“He runs it on the weekends only, not on school nights,” Milo said. “I need him to focus on school during school nights. But on the weekends, we blow up the moon walks. He comes out to have a good time. His customers come and he goes in the building, he helps them out, he makes change and gives it to them, and he comes back out to play.”

They recently bought a plot of land near the Seawall for a second location.

But it could soon become their only source of income, as the 8th grade teacher’s contract was not renewed past this school year.

“I’m always in and out of work with his condition, and now…I didn’t get renewed at work. It sucks because I do need the insurance for him,” she said. “But, you know, we don’t stop living. We keep going.”

For now, living big is in the near future.

After going over options with the Wish Granters Thursday, he could be in Daytona Beach, Florida to be in a racecar.

It was an idea Milo had quickly dismissed until Wish Granter Tamra Strano explained it had been done many times in the past, and is always a controlled situation.

The Texas Gulf Coast and Louisiana chapter granted 415 wishes in its last fiscal year, including one to a child who will be starring as an extra in a film with Keanu Reeves.

And at an average cost of $9,700, wishes are paid for from start to finish.

“When they are granted a wish, they want for nothing,” Strano said.

Romar sat with Wish Granters to develop several ideas. It will be about 45 days before he finds out which he receives.

His mother still doesn’t know who submitted his name to the organization.

“I got the news on Jan. 11,” Milo said. “It was pretty cool because my birthday is Jan. 13. It was the most perfect birthday gift ever.”