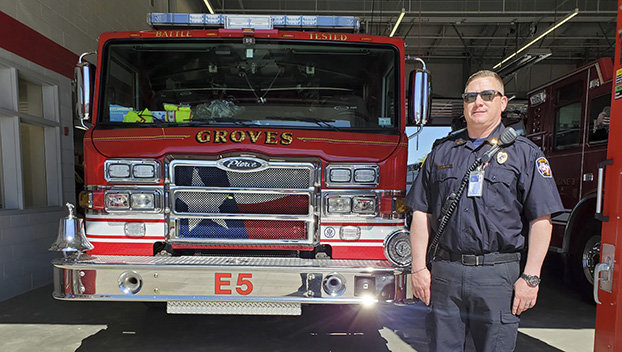 GROVES — As a volunteer firefighter, Ryan Hearn wanted to make sure he had the skills needed to be part of the team.

To do so he put himself through the fire academy, though it was not required.

A Groves native, Hearn said was drawn to the duties of being a volunteer firefighter to help his community and others.

He was recently named Groves Fire Department Otis Barnes Fireman of the Year.

Hearn works at Ineos Chemical Company in Port Neches when not serving as a volunteer firefighter.

Groves Firefighter Josh Nelson described Hearn as dedicated, saying Hearn works hard and is willing to learn more about the job to serve the citizens of Groves.

“Ryan spends a lot of time down here and loves the fire service,” Nelson said. “If someone needs help, he’s the first one to help where he can.”

Typically individuals chosen as firefighter of the year have been with the department for more than a couple of years. For Hearn to be chosen after two years shows his dedication, Nelson said.

As for the training at the fire academy, Nelson said Hearn did that all on his own.

“Nobody asked him to do that,” Nelson said.

The award is named after the late Otis Barnes, who was a member of the Groves Volunteer Fire Department for more than 50 years.

“The Groves Fire Department is really proud of Ryan Hearn for how far he’s come and for how hard he works and for his dedication to the citizens of Groves,” Nelson said.