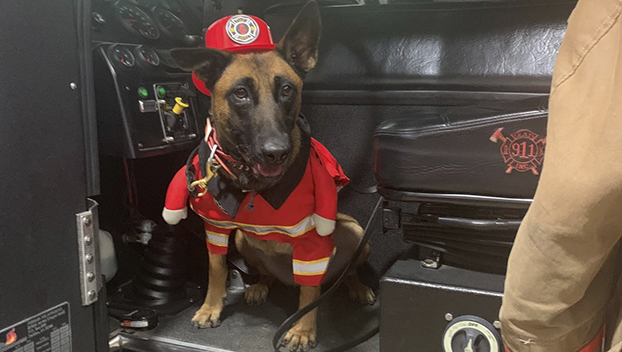 Vidor Police Chief Rod Carroll used this image of a dog in a humorous post on the department’s Facebook page. (Courtesy photo)

When Vidor police posted on Facebook asking for help in locating a wanted man, they also asked readers to help wish him a happy birthday.

The humorous post garnered the attention needed and led to the capture of the man described by police as armed and dangerous.

“We got a phone call about him walking down the street in Beaumont, Texas. That’s how we got him. Someone saw that post,” Vidor Police Chief Rod Carroll said.

Carroll likened the use of humor to a marketing skill.

Back in October, VPD served a felony warrant to a man on Halloween. Officers were stationed at the front and back of the home while one of them knocked and said, “Trick or Treat.”

The man opened the door, there was a conversation between him and the officers, and he was ultimately arrested.

So when Carroll saw a photo of a dog looking official while dressed in a firefighter’s costume, he used the photo for the VPD Facebook page saying, “K-9 Rocky is getting ready for next year’s, ‘Felony Trick or Treat.’ Do you think anyone will recognize him?” 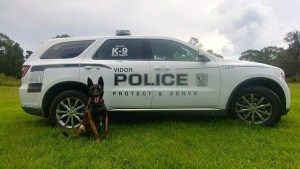 A photo of a Vidor Police Department K-9 and police vehicle. (Courtesy photo)

“If you can make someone laugh, you’ve made their day,” he said. “The world is full of many bad things.”

On Jan. 31, Ortego posed about a Valentine’s Day Weekend Special.

“Do you have an ex-Valentine and know they have outstanding warrants? Do you have information that they are driving with drugs in their car? Give us a call with their location and we’ll take care of the rest,” according to the post.

Ortego went on to describe the “set of limited-edition platinum bracelets, free transportation with a chauffer, a one-night minimum stay in luxurious accommodations and professional glamor shots that will be posted online for al to enjoy.” 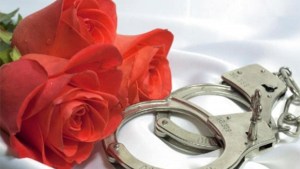 Orange County Constable’s Office posted this image Jan. 31 as a special for people whose exes have warrants. (Courtesy photo)

Ortego, who has been in law enforcement for 15 years, was elected to the constable’s position in 2020.

He said he followed in the steps of Harris County Constable Mark Herman who gets a lot of reaction for his humorous posts.

“It trickles down to Southeast Texas by way of Houston,” Ortego said, adding Herman’s ideas are brilliant.

Carroll started his career in College Station in 1988 and obtained an engineering degree from Texas A&M. He has worked in the private sector and has been in law enforcement for decades.

While the humorous posts gain attention there is a time and place for laughs. He said he would never use humor with more serious crimes, such as murder or those involving abuse of a child.

“We use humor to draw people’s attention and also to let them see we are human,” he said.