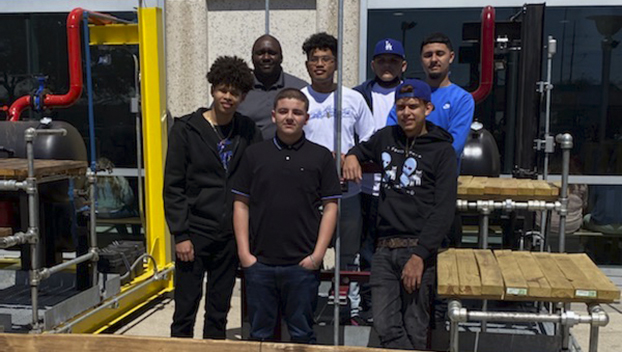 Talent from the Port Arthur ISD Career and Technology Education Center was on display in Houston recently when the welding program competed in the Livestock Show and Rodeo’s Industrial Crafts Competition.

After working for five months on a custom barbecue pit, six students and Instructor Vandy Smith traveled March 19 to compete in the contest.

The competition launched in 2020, however it was canceled along with the rest of that year’s events.

In 2021, Port Arthur ISD joined for the first time, but COVID impacted completion.

But this year, they were ready to join other schools to show off their skills.

Smith said the supplies are sent to the school from various companies, along with blueprints for the project.

The class began work Oct. 19, and their barbecue pit was picked up March 9. 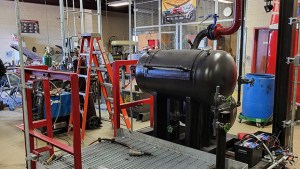 A barbecue pit built by the welding students at the PAISD Career and Technology Education Center. (Courtesy photo)

“Everything had to be built from scratch,” Smith said.

Once at the competition, the six participating students who are all seniors had to give a full presentation with a PowerPoint to the three judges, who asked questions about the project as well as their post-high school plans.

“It’s a nice program because the people from industry come out and do a full orientation before we can even start,” Smith said. “They deliver the material in different phases. Every school has a mentor that provides them with what they need and feedback. We’re the only school outside the Houston area except for a school outside of Corpus Christi that’s even in it.”

“They weren’t excited about the outcome,” the instructor said. “Their expectations were high; they worked hard on it. The goal was to get top five. That was their goal.”

But, CATE Principal Kevin Johnson said, their reaction to the ranking was as impressive as the project itself.

“The kids notice and they critique themselves,” he said. “They were saying, ‘We should have done x, y, and z,’ and I was very impressed by that. They were humble enough to say, ‘We could have done something a little different.’ And they love what they did. If that’s not learning, I don’t know what is.”

As a dual-enrollment program between PAISD and Lamar State College Port Arthur, every student that completes the welding course at CATE will graduate with tools to begin a career. In addition to a certificate from LSCPA, they will have their National Center for Construction Education and Research (NCCR) certification as well as welding certification from M. Weeks Laboratory Testing and School in Nederland.

DPS: Orange child who died in bridge crash was…