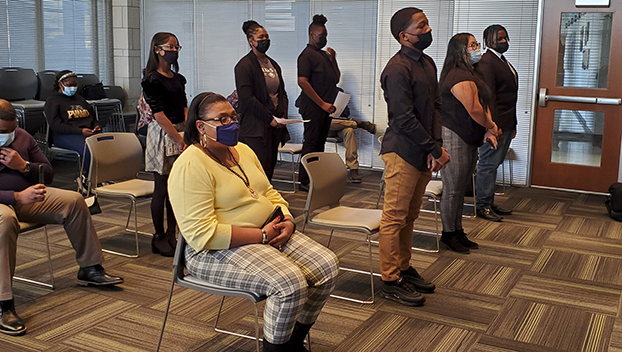 A group of PAISD students who are part of the YMCA Texas Youth and Government program stand during a board meeting. (Mary Meaux/The News)

The idea that democracy must be learned by each generation isn’t lost on a group of students and educators in the Port Arthur Independent School District.

The students, part of the YMCA Texas Youth and Government program, are learning of policies and methodologies of government.

Courtney Charles, secondary schools social studies supervisor, said the students who took part in the recent youth and government competition put in a lot of time and hours and showed a lot of effort to display their talents. 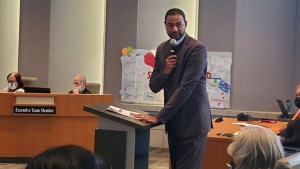 A total of 16 PAISD students competed in the district youth and government conference in Houston. Eight of the 16 advanced to the State Youth and Government Conference, held at the State Capital Building in Austin. And two middle school students placed top 10 of 58 students in the State Junior High School State Conference.

The program got its start in the late 1930s with Texas joining in 1946, YMCA of Southeast Texas CEO Kevin Pearson said.

But in 2020 there was more going on then the pandemic. It was a time of social unrest and racial justice, he said.

“And this has happened to us time and time again in our history and what happens? It goes away,” he said. “The students take an active part in the civic engagement process.” 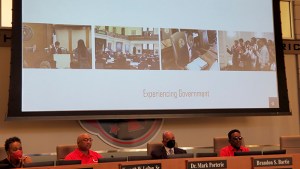 School board members and superintendent listen to a presentation on Texas Youth and Government. (Mary Meaux/The News)

The program was revived in 2020 with a grant from the McKenzie Scott Foundation. Pearson reached out to PAISD Superintendent Mark Porterie, who in turn placed him in touch with Charles to recruit the students.

Charles spoke of the importance of the Y’s values — caring, honesty, respect and responsibility and how humanity is a lost art. He spoke of Martin Luther King Jr.’s quote, saying character plus intelligence is to be a goal of true education and the foundation of who we are, our self worth and our value as well.