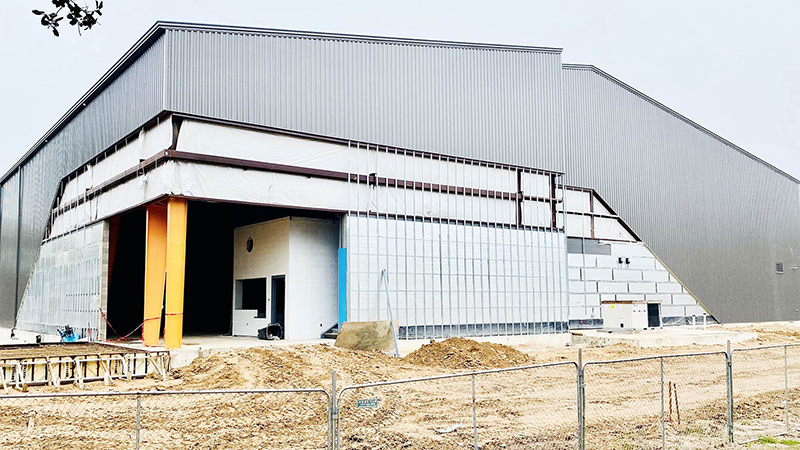 Photo shows the outside of the recreation center back in February. (Courtesy photo)

ORANGE — The City of Orange is nearing completion of a recreation center that was part of an $8 million bond initiative passed by voters in December 2018.

The city’s Parks Division Manager James Lawrence said the project is tentatively scheduled to be complete by the start of July. Lawrence said the 2018 bond also included the $700,000 Orange Riverside Pavilion.

The city used the location of the former natatorium, located off West Orange Avenue, for the new recreation center.

“The building contains two full-sized basketball courts,” Lawrence said. “Those can be converted into four full-sized volleyball courts. At this point, we are still estimating July. We still have contractor, and it depends on the flooring contractor. The building itself is completely new. Parts of the old foundation were used where we could. The natatorium structure was not built high enough to house a basketball court. You would be hitting the rafters.” 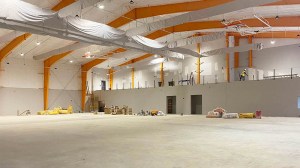 Workers continue construction on the inside of the Orange Recreation Center. (Courtesy photo)

The city hired Anthony Dandridge to work at the center’s director.

“The purpose of the rec center is for our citizens to have somewhere to go, and so they don’t have to go to Port Arthur for the YMCA or to Nederland to go to their rec,” Dandridge said. “We want them to have something in Orange that they can feel proud of.”

Dandridge said the facility will offer classes and free play in multiple sports, but added the city has not yet determined what pricing for such activities would look like.

“We are building the program from scratch,” Lawrence said. “Anthony (Dandridge) has a lot of good stuff we can do, and we have to make it fit into our budget. We have to work through the process of seeing what will work and what will not. We haven’t had a recreation program in the city since the early 90s.”

Lawrence said the project is one of many the city has worked on in recent years to improve the quality of life.

“This has been one of Mayor (Larry) Spears’ projects that he has been wanting to see happen,” Lawrence said. “We want to give, not only the youth, but the citizens of Orange a good outlet to be active. We want them to be able to exercise and have a good time.”