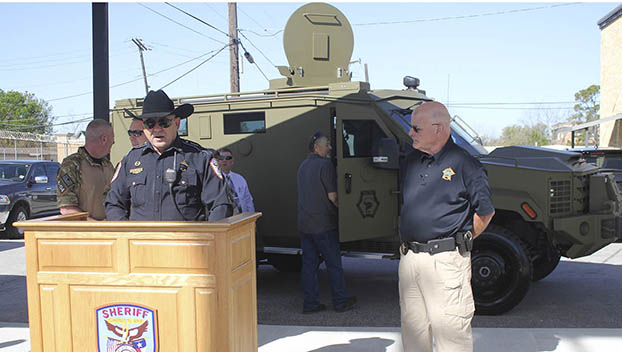 CUTLINE: Orange County Sheriff Jimmy Lane Mooney was thrilled about the department getting a high-powered arsenal Lenco Bearcat that will be a game-changer. (Van Wade/The News)

Talk about a nice new ride.

The Orange County Sheriff’s Department certainly has one. 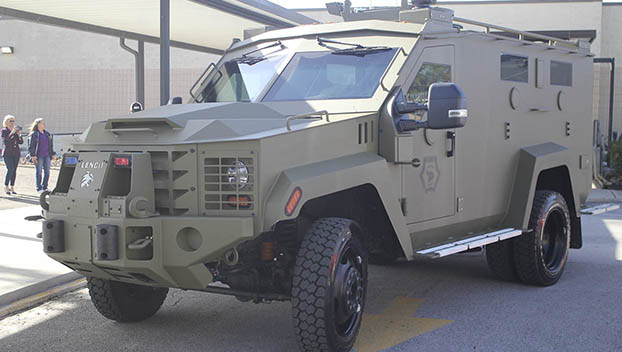 “Getting this fine vehicle is definitely a game changer for us and is capable of saving a lot of lives,” Mooney said. “It’s a tremendous addition to our office and to the Orange County area.”

The Sheriff Department has been in the process of getting the Bearcat for nearly a year and a half and everything came through as planned.

“The total cost of it is $228,000, and the best part about it, it didn’t cost the taxpayers one cent,” Mooney said. “We want to thank all the drug dealers and drug cartels out there for it. We’ll continue to do our best to get them off the streets, and this Bearcat will be a part of it.”

Mooney was one of the members of the Sheriff Department that drove the Bearcat back from Massachusetts and loved the trip.

“It was a great trip and it was a smooth ride for about 1,800 miles,” Mooney said. “We picked it up Tuesday and just got in today. It gets a little better gas mileage then you would think.”

“It’s a great addition not only for our department but it will be utilized for other departments as well,” Mooney said. “We’ll certainly allow agencies that need it.”

With so many drug busts happening throughout the region. the Sheriff ‘s Office has been blessed with new equipment.

They have spent $1 million on new vehicles, with no cost to the taxpayers along with several other important items such as radar improvement and drones.