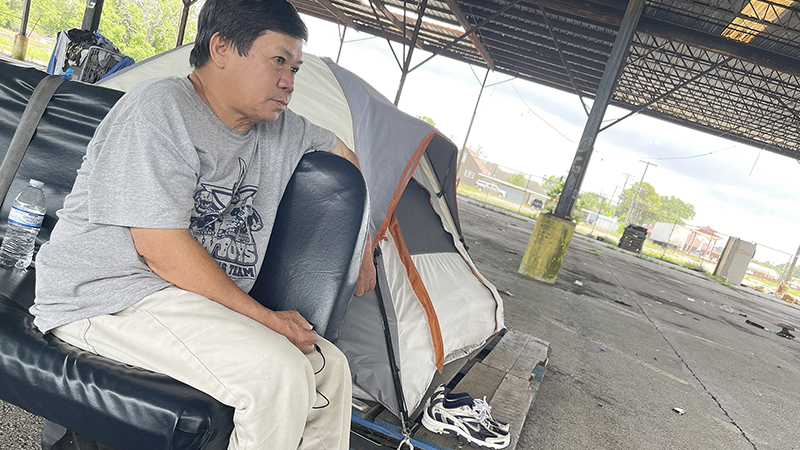 Tuyen Doan, 57, sits next to his tent on 9th Avenue in May. While he’s been living there for about 10 months, he was able to get a COVID vaccine at the library. (Monique Batson/The News)

More than 360,000 people in the United States experienced homelessness on a single night last year.

And it’s a statistic from the U.S. Department of Housing and Urban Development that the Port Arthur City Council is hoping to lower with the formation of the Port Arthur Coalition for the Homeless/Advisory Board.

“The idea behind it is, I have noticed just from my own observations, that the encampments are growing,” said Mayor Thurman Bartie, who put the idea before council in a special meeting this week. “It’s becoming a national issue.” 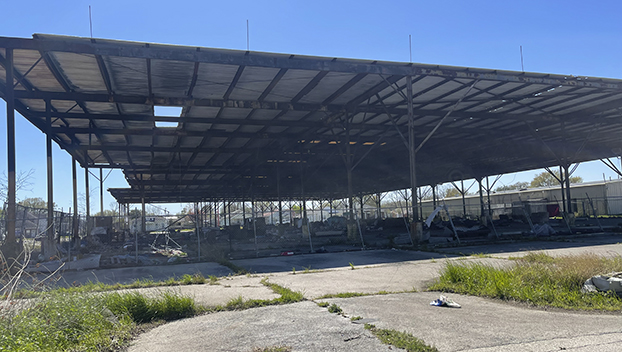 A covered area on 9th Avenue has become a known camp for those experiencing homelessness. (Monique Batson/The News)

While the overall number of people experiencing homeless declined during the height of the pandemic, the number of those with chronic patterns of homelessness grew by 20 percent between 2020 and 2021, according to HUD.

“The findings of the 2021 AHAR Part 1 report suggest that federal COVID-19 relief had positive impacts on sheltered homelessness,” said HUD Secretary Marcia L. Fudge in a written report. “Yet we know that homelessness in America remains an urgent crisis. As long as people in this nation continue to lack affordable, secure housing, our work to put Housing First is not done.”

Housing First is a HUD effort to put individuals and families experiencing homelessness into permanent residences. Of those accounted for last year, six in 10 were individuals while the remaining four in 10 were people in families with children, HUD data reports.

The new advisory board will consist of 14 members, two picked by each council member, that work within the city to find ways to combat homelessness by identifying the issues within Port Arthur, working with the community and agencies for resources, and “creating a homeless response system,” according to city documents.

Members will serve two-year terms on a volunteer basis.

“We would be able to construct, provide and obtain housing for individuals that meet certain criteria,” he said. “And the criteria is not strenuous. They have to be homeless with the desire to do better.”

The mayor said groups such as PAISD graduates and local churches have reached out to assist with helping the homeless population.

“We have several entities in the city that I’ve had dialogue with that I want to be sure are involved,” he added. “We have to have an organized effort.”