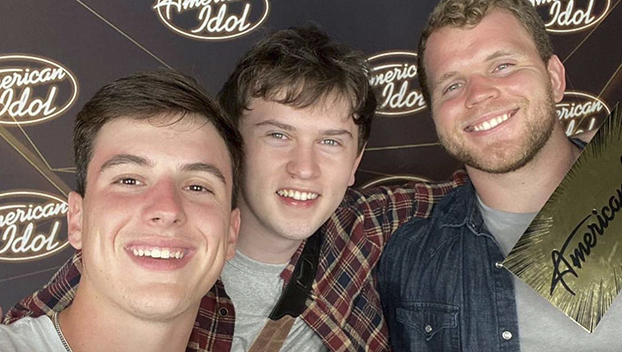 From left: Cade Latiolais, of Groves; Logan Hammonds, of Port Neches; and Fritz Hager, of Tyler; met at an ‘American Idol’ audition in Austin. (Courtesy photo)

Hollywood recently got very Southeast Texas after two natives to the area made it through the audition round in the new season of ‘American Idol.’

Logan Hammonds, of Port Neches, also performed before the three famous singers, as he played accompaniment for Cade.

And while there, the three formed a kinship.

“Fritz hit it off with them and made friends,” said his mother, Sarina Hager. “I think that’s been the best thing for him so far, coming from small town Texas. And that’s the dream for a mom.”

While the Hagers live in Tyler, Sarina is Southeast Texas to the core. She was born in Port Arthur to Joe Drago, owner of Drago Supply Company. Her husband was born in Beaumont, grandson of longtime Port Arthur News publisher Jack Scott, who died in 2001.

“A lot of the people and things that inspired Fritz’s music are rooted in Southeast Texas,” Sarina said. 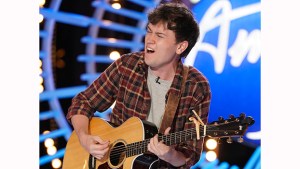 It was the primary influence behind his song, “The Ocean,” which he wrote for his grandmother, Brenda Drago. Sensing his affinity for music, she bought Fritz his first guitar and enrolled him in lessons.

The family has long had a beach house on Bolivar Peninsula. While the first was destroyed by Hurricane Ike in 2008, they rebuilt and still gather there every summer.

When Fritz was a teenager, his grandmother asked him to write her a song about the beach house.

“He promised her he would, but it took him about 10 years to figure out how to do it,” Sarina said. “This past year during COVID he wrote this song for my mother. It’s really a beautiful song about the beach house and nostalgia. It’s sacred ground to so many families in Southeast Texas.”

Fritz’s grandmother died in 2017 before she could hear the song.

The song will be featured on his upcoming EP, which will be released March 25.

Texas auditions were held last summer in Austin, were Fritz and Cade went before the judges.

However, only one made it to the televised audition shows this past Sunday. 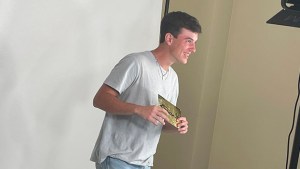 Cade Latiolais shows off his golden ticket to Hollywood after auditioning for ‘American Idol.’ (Courtesy photo)

“With only two episodes left of auditions, it’s a really big possibility that mine will not air,” Cade recently posted on social. “I know every season there’s a ton of talented people that audition and it’s impossible for them to air all of them.”

Still, he’s pictured with the golden ticket that sent him to the Hollywood round.

Already filmed, the participating contestants know who made it and who did not. But as they’re not allowed to discuss it, those following will have to watch weekly to learn.

Fritz’s audition was aired live on television, and with an additional surprise.

“As a kid I was really inspired by Phillip Phillips who was on the show 10 years ago, actually,” he told cameras in a vignette. “I loved his sound, you know. The way he played guitar. He inspired me to play guitar and I always wanted to sort of be where he was.”

Before his audition, Fritz was put in front of a large screen, which played a personal message from the 2012 “American Idol” winner.

The Tyler native with local roots sung “Before You Go” by Lewis Capaldi.

“Tough one. I don’t even know how to start a Lewis Capaldi song,” Luke Bryan said.

Lionel Richie told the 22-year-old,” that chorus was very strong.

Ultimately, with his family hosting a watch party, he would be shown advancing to Hollywood, just like Cade.

“At some point it becomes a numbers game in American Idol. We just want everyone in Southeast Texas to vote for him,” Sarina said with a laugh. “It’s a shameless plug for my son, but also for Texas.”