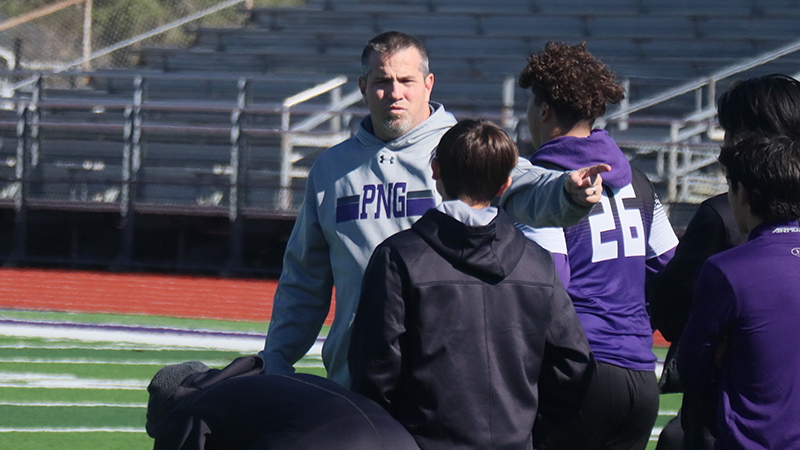 PORT NECHES — Both Port Neches-Groves soccer teams will compete in the 5A playoffs this week. The PNG girls team, who won the District 21-5A title, will play Manvel Friday, while the boys squad will take Texas City at Barbers Hill on the same day. Both PNG schools won district.

Girls Head Coach Aimee Bates said her squad is coming off its best practice of the year. The team played Little Cypress-Mauriceville in a warm-up exhibition game Tuesday.

“The energy in the practices was different,” Bates said. “When you have been practicing since December, it gets monotonous no matter how many different drills we do or new things we throw at them. I gave them all the way until Friday off and then we had a two-hour practice. It was new life for them. They were happy to be there. They were getting touches on the ball. They were loud. It was an energetic practice.”
Bates said Manvel has three strong midfielders.

“They have good sides,” she said. “We are going to have to try and contend and neutralize that and go to battle in there. If we keep the ball more than Manvel does and have more chances that they do, we have a better shot of being successful in this game.”

On the boy’s side, the district race came down to the final game. A PNG loss to Memorial would’ve made PNG the third seed. Head Coach Chad Luttrull said the team was excited.

“The soccer season is long,” he said. “We start really putting in time in August with summer workouts. We do a lot of weights, a lot of running and a lot of tactical soccer. It is a testament to their hard work that they were able to put it all together. It was a lot of pressure on those kids. It came down to the end.”
Luttrull said the rigorous district schedule has helped prepare his team for the playoffs.

“We had a little gap between the top-three teams and the bottom four, but even at the bottom, those teams were fighting for that final spot,” he said. “Soccer is growing so much in this area and coaches are on their games. They are doing great jobs and pushing us.”

The coach said Texas City has been in playoff mode for a while as their quest for the playoffs came down to the final game of the season.

“They are in a district like ours,” he said. “They beat a good Friendswood team. It is going to be tough. It doesn’t matter if you are the top seed or the bottom seed. Look what is happening in (college) basketball. You have to play the game. I look for them
to come out and give us a game.”