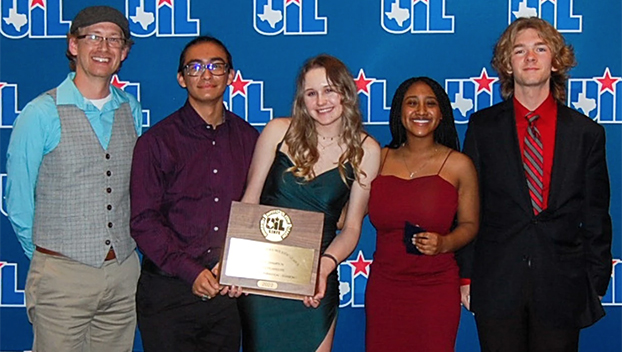 The stop-animation film, which is 2.5 minutes long, uses an original score and voice work by members of the team. The film, “Starcrossed,” is about a man who travels a dangerous journey to be with a mermaid.

“The whole thing is photos and they had to put them one after another,” Director of Theatre and Film Chris Rector said.

Londenberg drew and cut out the characters at home. 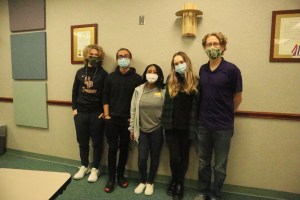 “It really was an experiment to what would work in the beginning,” Rector said. “We had a lot of conversations early on about the story. We wanted to make sure it was a full story. This is an interesting contest, because my role is strictly as an adviser.”

Unlike many UIL events, the film competed with schools in 1A all the way up to 4A.

“There are a lot of 4A schools that are massively bigger than us,” Rector said. “The film department is really coming along. This is the fifth year in a row that we have had a film in state.”

Reyes said making sure every picture was in the correct spot was the most difficult part of the process.

“If you move it too much it can look all choppy,” he said.

Lodenberg said she and her teammates tried to keep tabs on other potential state-winning films throughout the process.

“We would watch them and say they were amazing,” she said. “Everyone does such a good job. We were watching all of these films at state and were blown away by their creativity and story lines. We were excited to just make it to state. This was the first time we could go because of COVID and all of that.

“We were just hoping for the top three and when they called third and second, we started looking forward to next year. Then, they called first and we got super excited.”

The group began to plan the film at the beginning of the school year in August.

Jones, who came in towards the end of the process, provided sound effects for the mermaid.

“This is my first year going into film,” Jones said. “I have always wanted to do this, and being a voice actor was amazing.”

Richards had only been with the district for two years and participated in film for his first time this year.

“I looked at some of the older films they had done and I wanted to be a part of that,” he said. “I wanted to put in as much effort as I could.”

Richards wrote and performed all of the film’s music.

“They each had different talents that they pulled in to make it work,” Rector said.