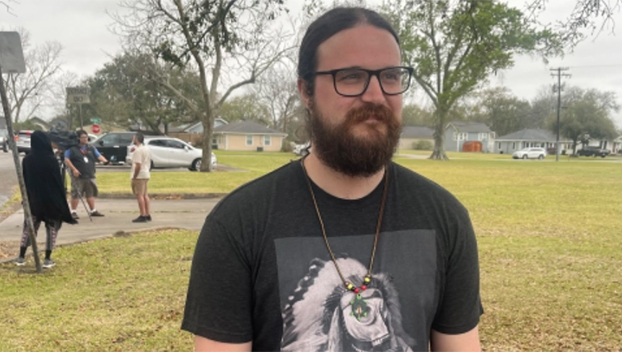 PORT NECHES — A peaceful protest planned from 5-10 p.m. Monday in front of the Port Neches-Groves Independent School District Administration Building was attended more in passing than in person, as a stream of vehicles drove down Avenue C with few stopping.

As rain began to fall at approximately 5:30 p.m., a group of 20 people gathered under a tree on the property, one being PNGISD graduate and Cherokee descendant Yona Usdi.

Yona said he was there to ensure conversations continue regarding the use of the district’s mascot and Native American-themed traditions.

More: “Trustee says they’re getting 1,000-plus emails on the topic.” 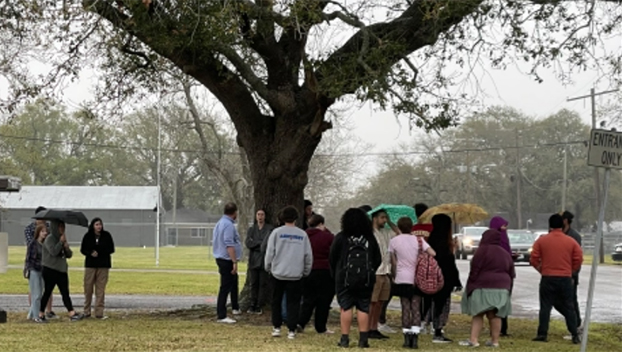 It’s not the first time controversy has surfaced regarding the district’s mascot, nor the first time Yona spoke about it. Last year he went before the school board with a similar message.

Monday’s protest, which followed national attention from a Spring Break performance at Disney World by the school, took place outside the building as trustees were scheduled to meet at 5:30 p.m. for a workshop.

The district’s school resource officer was inside the building, while various officers from the Port Neches Police Department were on standby. Chief Paul Lemoine, who stood outside the police department located across from the administration building, said early on that he was not expecting any problems. Should a group arrive, he said, he would meet with the organizers and discuss ways to protest as planned legally and safely.

While no clear organizer arrived within the first hour, those who attended visited calmly with each other..

In that same time frame, four vehicles drove by playing “Cherokee,” the district fight song, but did not stop; while two dozen other vehicles parked around the administration building. The occupants did not exit, some only staying for a short while. 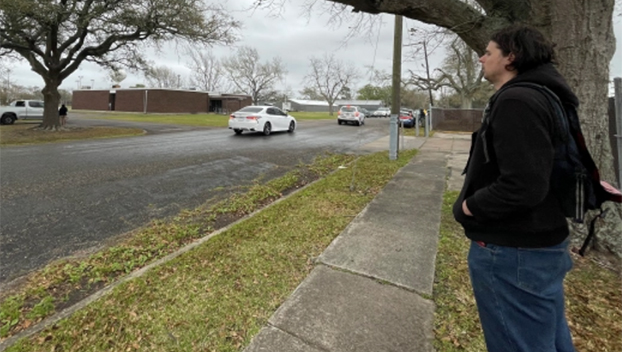 Shaun Sheppard, who graduated from PNG in 2009, said he was there with a video camera to document any notable activity.

As to what he would change, Sheppard said he would like to see the mascot meet with Native American tribes to form an alliance between the district and indigenous people.

Social media has, since late last week, been filled with people calling the district culturally appropriative and racist following the Orlando, Florida, performance. 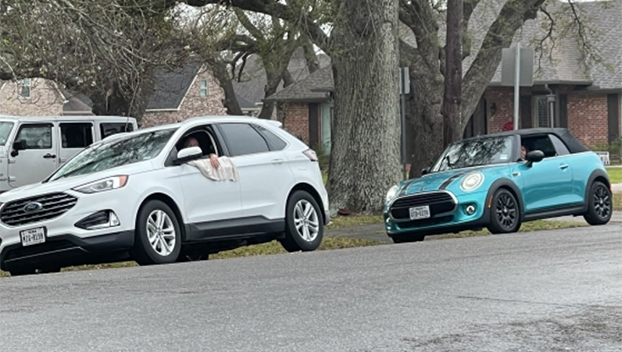 Drivers parked along Avenue C and nearby streets, watching from inside vehicles. (Monique Batson/The News)

The statement did not address when the audition tape was sent or comment on similar performances by PNG at Magic Kingdom over the last several years.

“Port Neches-Groves Independent School District continues to use offensive and stereotypical depiction of our tribe, and this is yet again exampled by their cheer team recently in Orlando,” it says. “For the past couple of years, we have written to the Port Neches superintendent and school board asking them to cease using this offensive imagery, chanting, symbolism and other practices in their school traditions as this does nothing but dishonor us and all Native American tribes who are making great strides in this country.”

Hoskin wrote to district leaders in 2020 to change the mascot and Native American-related school traditions.

In the late 1970s, Cherokee Nation presented the district with a document issuing permission for the use of the mascot, which is often referenced by community members when the debate reignites.

PNGISD also released a statement Friday saying, “We are committed to diversity, equity and inclusion in our school district. Our district is nearing 100 years old and our Board of Trustees is committed to always making the best decisions for our students, staff and the communities of Port Neches and Groves.”

Sunday afternoon, community members led a prayer vigil at Port Neches Riverfront Park. Sheppard said those in attendance did not speak much about the controversy, primarily praying for the district, its employees and the students.