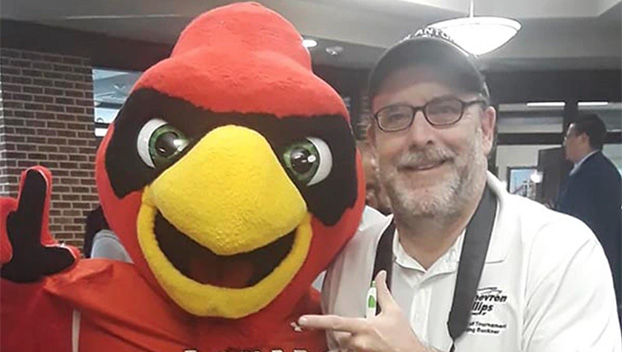 Van Wade having fun times with the Lamar Cardinals mascot during a visit to Orange. (Courtesy photo)

What is going on with my alma mater and its athletic program?

Being a proud 1990 Lamar University alumn, I sit around at times wondering what in the world is happening to a once-proud overall program.

I was fortunate growing up with the powerful Lamar basketball program, led by the late, great Billy Tubbs and Pat Foster.

I remember watching the hoop teams and venues grow.

I saw games at old McDonald Gym in its “hey day,” when Mike Oliver was ripping long-range bombs and Clarence “Pick’ Kea was bruising his way inside in front of a packed house.

The NCAA Tournament came calling, and Tubbs and Co. made the Sweet 16 twice.

The Cardinals also found their way into the Big Dance under Foster’s reign, and the Cardinals outgrew McDonald Gym and moved to the Beaumont Civic Center, once again playing in front of a packed house.

Then the Montagne Center came a long and the program prospered for a little while longer. Then powers that be thought Lamar could be an annual powerhouse getting into the old Sun Belt Basketball Conference, which made football into an Independent program, which eventually led to the football program getting no support. It was canceled until it cranked back up again in 2010.

These days, Lamar Athletics seems to be a “shell of its former self.”

The basketball program just went 2-27, 0-18 in a newly-formed Western Athletic Conference that the Cardinals really have no business being in. Not a single win against an NCAA Division I team and finished ranked 357 out of 358 teams in the country on one computer model.

That is not what Lamar Hoops is all about. Wonder what hoop legends B. B. Davis and Terry Long think about “Big Red” these days.

The Lamar Athletic Department seems to be in total disarray. Just last week, Athletic Director Marco Born resigned from his post after he had already been on a leave of absence.

When Born came in, he did a complete overhaul of LU Athletics, and of course, led the transition to the West Athletic Conference.

I have been to Lamar events; the attendance is so low. It was shrinking before the Cardinals left the Southland and now they are playing WAC foes.

I have seen larger crowds at Orange County basketball games than I have at Cardinals games.

First, you have to build the product back, but what I worry about is if anyone would go to the games anyway.

Gone are old Southland Conference foes McNeese State, Southeastern Louisiana and Northwestern State. Sure, SFA and Sam Houston joined the WAC but who would want to buy a ticket to watch the Cardinals take on the likes of California Baptist, Grand Canyon, Dixie State, University of Texas Rio Grande Valley and Tarleton State.

By the way, the Cardinals lost to Tarleton this season. Remember when Tarleton was a “cupcake” on Billy Tubbs’ schedule and the Cardinals would break 100 and everyone would get some free chicken at Popeyes for it?

It doesn’t seem that long ago when the football program made the playoffs. They have gone 3-13 under Blane Morgan, who replaced Mike Schultz, who led them to the postseason. The Cardinals football team was 0-7 in conference play in the fall.

The Lady Cardinals softball program went 8-43 last season and are a woeful 4-17 this season.

Cardinals baseball was on a downturn but has made a little comeback, going 25-23 last year. They are 11-6 this season and had a nice sweep of SFA last weekend to start conference play.

The Lamar track and cross country programs remain solid but the Cardinals have to start competing better at the sports that sell the tickets.

The Cardinals have had six coaching changes under Born, who most recently brought in Alvin Brooks to lead men’s basketball. Just a year after Lamar went to the national FCS playoffs, Born fired Schultz and replaced him with Morgan.

Growing up in Southeast Texas, I know Lamar Athletics is a “tough sell.” Lamar fans have been fickle over the years unless the Cardinals are winning.

Lamar simply doesn’t have the college-like atmosphere and great traditions like say McNeese, SFA and Sam Houston. The collective Lamar student body is much older than those schools above and is more of a commuter school compared to their old SLC rivals.

The whole Lamar University System needs to step in and get the athletics back up and rolling, to get more area people to want to go see their product.

The school is on a national search for a new AD and hopefully it will be a tremendous choice.

If not, things could continue to be “WAC-ky” for many of the alumni who supported Big Red for so long. How much longer can they do it?

Van Wade is sports editor for the Orange Leader. Contact him at van.wade@orangeleader.com.