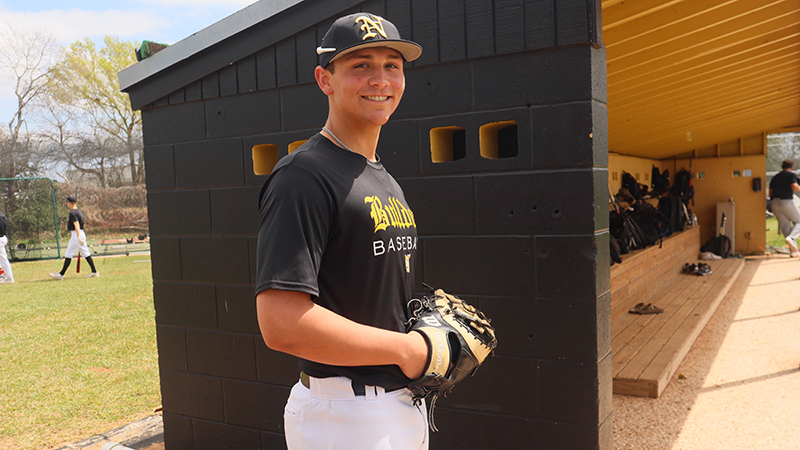 NEDERLAND — For any pitcher, the key to success is the ability to keep hitters guessing.

In his sophomore season for the Nederland Bulldogs, Brady Corcoran hopes to have batters swinging at what is not there.

The Bulldogs started district play this week in a series against rival Port Neches-Groves with Corcoran starting on the mound for Nederland’s 10-0 win over the Indians.

“It was nice to start out district with a win,” Corcoran said. “Port Neches is a good team. I am happy to get the win and hopefully set up a big season.”

The sophomore is in his second season as the Bulldogs ace after an impressive freshman campaign. The experience helped him start this year strong.

“I now know what it feels like to pitch on a bigger stage,” he said.

Part of keeping hitters off balance is the ability to throw different pitches. Corcoran’s go-to ball is still a change up, but adding more throws to his arsenal has helped.

“I want to fix up my mechanics,” he said. “I want to unlock some more power with my lower half and sustain my top velocity for longer periods of time. I play during the summer, so that helps me make a jump the next season. I also work out two times a week with a personal trainer.”

Corcoran plays tight end for the football team but said his first love is having the ball in his hand.

“I like being able to control the game,” he said. “I like having control of the speed. When I am in the zone, it is just me and the catcher. It is just me and Mason (Beresford). It is funny. My mom will ask me if I can hear her when she is yelling and I can’t. It is just me and whatever is in front of me. That is what I focus on.”

Catcher Mason Beresford can tell pretty early on if his pitcher is feeling it.

“He is very good at hitting his locations,” Beresford said. “He gets the job done. You can trust him to go up there and throw a strike and get three outs. With Brady, I can tell in the first three batters if he is there and has all of his stuff ready to go.”

“You always want it to be different,” he said. “You never want to be in a routine. I try to change it up. I have just started throwing the cutter. It was my least-thrown pitch going into that game. I threw it more and it helped. I want to get more control of it.”