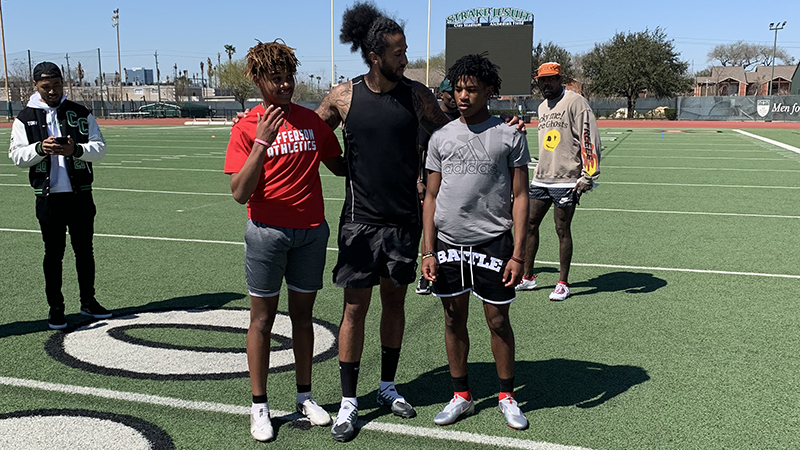 Martin, who is an eighth grader, and his friend Brock King, who plays quarterback for Vincent Middle School in Beaumont, were training with Fast Houston at Houston Jesuit High School when their coach pointed out the former 49ers quarterback practicing on the field.

“We were training, and our coach pointed him out and told us to go over there, talk to him and get a picture,” Martin said. “He started asking questions about us. He asked us our names and about what position we played. It was good.”

Earlier this week, Kaepernick made headlines when he tweeted about his desire to still play in the NFL. The quarterback has been working with NFL receivers in hopes of getting another shot. In previous offseasons, the Seattle Seahawks played around with the idea of signing the quarterback but nothing came to fruition.

In 2016, the 49ers quarterback took a knee during the national anthem to protest police brutality.

The act sparked backlash and became a talking point in the presidential election.

Kaepernick finished the year with San Francisco but was released after the season and was never signed by another team. His act, while polarizing, caused people to compare him to other sports icons who participated in the Civil Rights Movement of the 1960s like Jim Brown and Muhammad Ali. The quarterback settled a multi-million dollar lawsuit with the NFL in 2020.

The quarterback has a career touchdown-to-interception ratio of 72-30 and started in a Super Bowl.

While Martin was only 7 when Kaepernick took a knee, the Port Arthur native said he watched a film about Kaepernick after the fact.

“He was one my favorite scrambling quarterbacks,” Martin said. “That is what I do. Brock’s daddy told us about a movie called Black and White. I watched some of it. It made me do a lot of thinking about everything that is going on.”

Martin said this was his first year to partake in the Fast Houston training and added he would like to do it again in the years to come. Fans of Titans football should keep an eye out for Martin, who has dreams of playing for Memorial on Friday Nights in the near future.