Nederland powerlifters carrying more than their weight to state meet 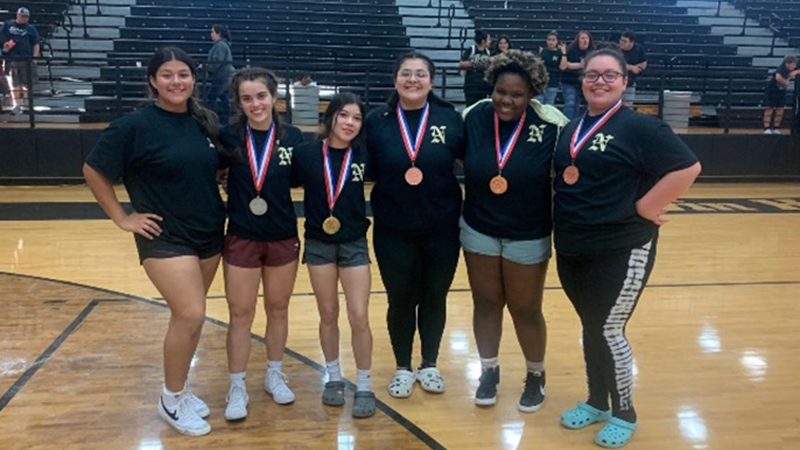 NEDERLAND — The Bulldogs are taking a loaded roster to the girls state powerlifting meet in Corpus Christi this weekend.

Six girls are making the trip for the Bulldogs after an impressive showing at the regional meet.

Taryn Burnet set a record at the regional meet by deadlifting 330 lbs.

“This will be her second year going to state,” Head Coach Jae Stoker said. “She is a junior… At the regional meet, you have to finish in the top two of everyone combined. It used to be the top two in 5A-Division II like it is for football. Taryn got second in the meet, but that was competing against both divisions.”

Shannon Perez will also make the trip for the Bulldogs. She is competing in the 97 lbs. weight class after getting first place at regionals.

“The 97-lbs. class is usually the younger girls because it is a light weight,” he said. “For her to win it as a freshman, it is a great accomplishment.”

Jadyn Walker, who is the daughter of Coach Jody Walker, will compete at state after returning from multiple ACL injuries.

“It is really her first year being back healthy,” Stoker said. “I’m sure if you asked her, she has probably done more than what she ever dreamed she’d be able to do. Her being a junior, I am excited to see what another year of getting stronger will do for her.”

Mia Watler is making a return to state in her junior season. She competed in the state meet last year.

Vanessa Hughes also went to state last year as a junior and returns for her senior year. Hughes and Watler finished first and second, respectively, in their weight class.

Rule changes allowed freshman Emali Men to make it to the regional round. She was able to prove she belonged by punching her ticket to Corpus Christi.

Stoker said Men split time between powerlifting and softball and was not able to attend every meet.

“She is finally figuring out what she can do,” he said. “It is a cool story. She gets put in the bottom half of the weightlifters and ends up being one of the two girls that make state.”