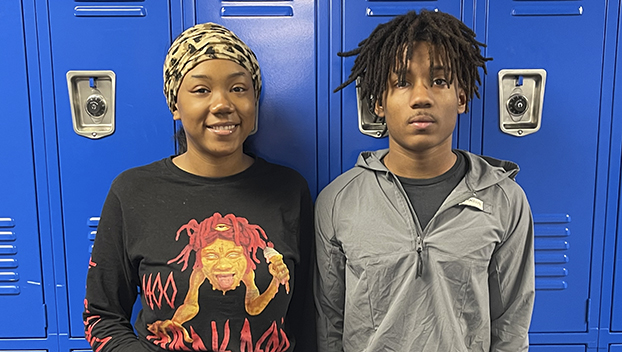 Aylissa Reese credits her initiative to apply early to college as the reason she was accepted to multiple universities.

And, combined with her high grade point average, it clearly worked.

In addition, she has received $99,500 in scholarships.

She is selecting Tennessee State University, which is providing her with a scholarship to cover all four years.

“I want to major in early childhood education,” she said. “I like kids. I have a lot of cousins. I’ve been around kids…and I’m still around kids every day.”

“My grandma wanted us to have better opportunities — my brother plays sports —and for better academics,” she said.

And it seems to have paid off for the honor roll student and her twin, who is a basketball standout at the school.

In addition, she has an older brother in college studying kinesiology and a younger brother at Bob Hope High School.

And it was at the school, in Shonkerah Greenwood’s career prep class, where she found the inspiration to be a teacher.

“In this class we learn a lot about life and college,” Reese said. “She’s a teacher I always enjoy. She talks to me and helps me.”

“(Aylissa) is the epitome of a studious Bob Hope Eagle,” Greenwood said. “She has demonstrated a love of learning on a level of commitment that displays her understanding of the necessity of making her education the top priority to succeed in college and beyond,” Greenwood said.

“She holds the title of BHS Homecoming Queen as chosen by her peers, and she also carries the reputation of a remarkable student among her teachers.”

It was one of those teachers that helped Reese find her favorite subject — history.

“I had a good teacher last year,” she said. “I had never really learned a lot in history until him. I really enjoyed it.”

Reese will graduate June 1 and leave for Tennessee in August. It’ll be her first time to visit the state after taking virtual tours of her soon-to-be campus.

While she’s nervous about leaving her family and attending a school where she knows no one, she looks forward to the adventure.

“I know I’m going to be shy and scared; it’s a big step,” Reese said. “I look forward to meeting people that are majoring in the same thing, and people that like what I enjoy.”