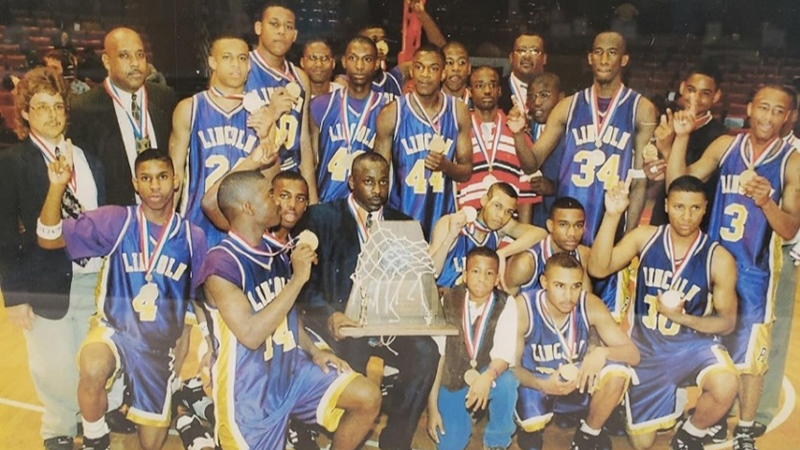 A picture of the Lincoln basketball team after their state title in 1995. (Courtesy photo)

In 2020, members of the 1995 State Champion Lincoln High School basketball team began traveling to San Antonio for recognition on the 25th anniversary of their historic win.

The trip was going to have extra meaning for Sidney “Dip” Keal Jr., who was also traveling to watch his son compete in the state tournament.

But they were handed a second chance, as the team is being honored today at the championship tournament.

Keal said he picked up his son Thursday on his way to San Antonio.

“When you are a kid, you get to see those other teams go get recognized and we knew it was coming,” Keal said. “It is just a blessing. I am so full. All of my teammates are still of existence. No one has passed. All of our coaches are still here. I can’t explain it. I am just going to go and enjoy it.”

Andre Boutte, who coached the ‘95 team and currently coaches at Beaumont’s West Brook High School, will also make the trip. The coach said he remembers the team was very determined.

“They were a great group of kids to coach,” he said. “They worked very hard and treated each other like brothers, and they still do to this day.”

Boutte said the level of success accomplished by the team didn’t surprise him.

“That game will forever be in my memory,” he said. “I don’t compare teams. No high school team is the same.”

Keal remembered feeling a lot of pressure going into the ‘95 season.

“I was also part of the ‘93 team that lost to Dallas Lincoln by one point,” Keal said. “I was part of the ‘94 team that lost to Austin Anderson in the ‘94 semifinals. My senior year, it was different. On the other teams, I didn’t have as much say so, because I was younger. When it was our turn and we actually won it, there was a lot of relief and weight lifted off our shoulders.”

Former NBA player Stephen Jackson was also on the ‘95 team and missed the first half of the season. The loss didn’t stop Lincoln from amassing a 27-game winning streak heading into the finals. Jackson and Keal started alongside Spencer Comeaux Jr., Dominic Hardie and Keith Harris.

“I will never forget the season’s lows and persevering what we had to go through with our team,” Keal said. “We had good words from Coach Gamble. We had the city of Port Arthur behind us. We had the school of Lincoln behind us. When you play Lincoln basketball, your season started in the summertime. It was championship or nothing.”

Lincoln won the game 57-56 in overtime and the rest is history.

Two Southeast Texas teams are playing the state finals. Beaumont United is competing for the 5A title, while Silsbee is playing for the finals in the 4A bracket.