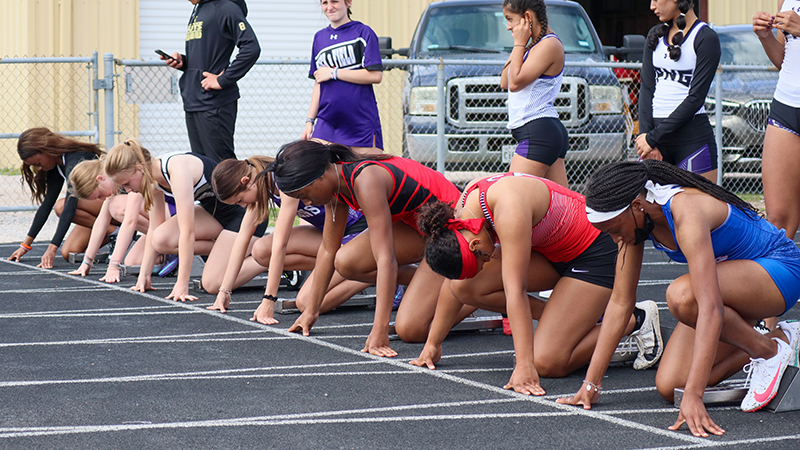 NEDERLAND — Last season, Nederland fielded a relay team made up of three freshmen and a junior. That quartet went on to break the school record for 4×200 relay with a time of 1:45.75.

This year, Senior Ke’Asia Hall and sophomores Kamryn Smith, Ava Whitehead and Lana Louvier return in hopes of breaking their own record. Hailey Marriot replaces Whitehead for the 4×400.

“I think that we have improved a lot throughout the season,” Whitehead said. “Our relays are getting really good.”

Smith said the team has worked diligently on handoffs and the hard work has paid off.

Head Coach Allie Crommett said the team is fortunate to bring back so much experience on such a thin roster.

“We don’t have to stress over who goes on which relays,” she said. “They are used to it. For us, the numbers we do have, they are all experienced runners… Last week at the Crosby meet, which we won, we basically placed everyone that we put into an event. That helped us and we put people in events that we haven’t been able to do in the past and they have been good enough to place.”

She is working her way back to full strength on the track.

“It feels great coming back from the injury,” Hall said. “It is good to get back to what I normally do.”

Last year, Hall qualified for regionals in the 100-meter dash, 200-meter dash, the triple jump and the 4×200 relay. She is the anchor for the relay teams.

Crommett said the team has sacrificed individual success for the relays as the squad looks to break more school records.

“We want to see what our real potential is in the relays,” the coach said. “When we get to district, we will see a little bit more… The 4×100 school record hasn’t even been close since 2003. For us to go sub 50 last week, the only thing I have seen is that Memorial might be one hundredth of a second faster than us last week. Right now, we have the potential to get out in almost every relay. We look at regionals and where we would stand. If we run a good 4×400, we could make it to regional finals. That depends on everyone buying in.”