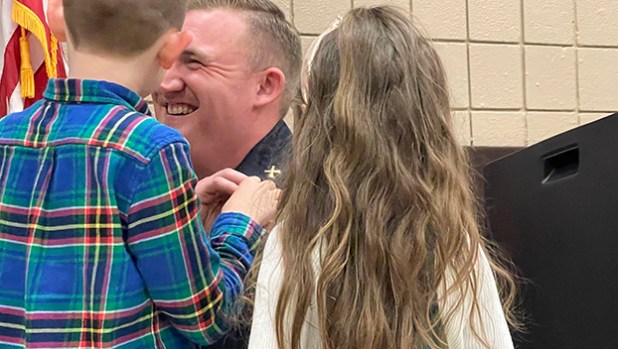 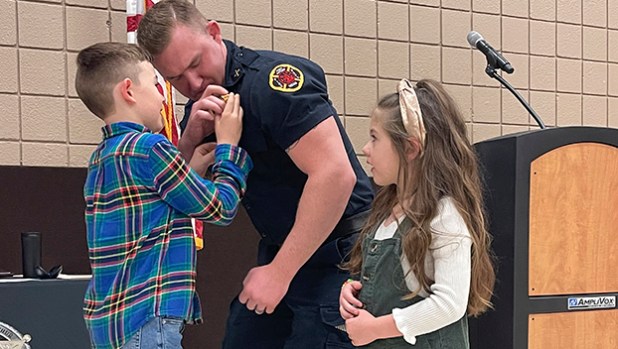 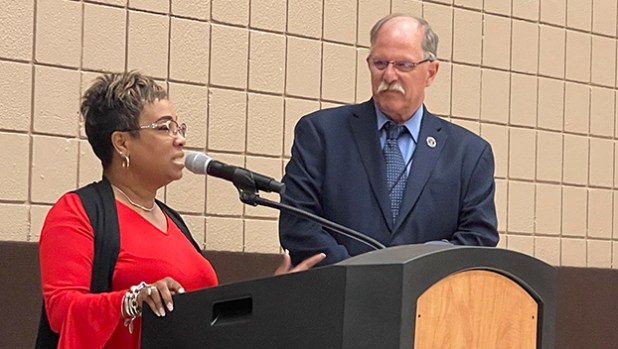 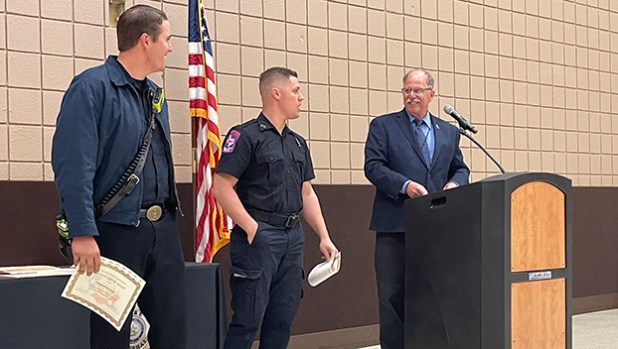 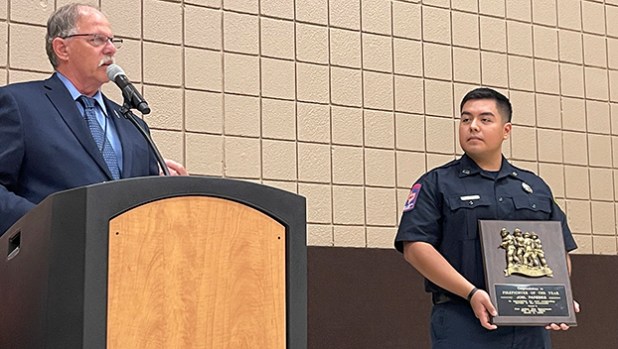 The Robert A. “Bob” Bowers Civic Center was filled with applause and appreciation this week as the Port Arthur Fire Department hosted a badge-pinning and recognition ceremony to honor promotions and honorary acts since January 2019.

“What does a badge mean? It’s a sign of what you are doing — your commitment and dedication. It’s a physical reminder,” Fire Chief Greg Benson told the crowd. “For people who have been involved in public safety or military, the badge-pinning ceremony is an important ceremony. It’s signifying that you are now transitioning from one role into another. It’s not just something shiny. It has meaning to it.”

Dozens of firefighters came up one-by-one to accept their pins — some doing so with and by family members — and to receive honors for acts of bravery displayed in the field.

Two of those were Firefighters Hunter Hanratty and Dylan Compton, who received a Medal of Valor for actions performed Aug. 17, 2021. The two arrived at a house fire when they heard calls for help from inside and entered the flaming residence to save the victim.

Joel Paredes was awarded Firefighter of the Year for being “highly dependable, providing leadership, maintaining professionalism, possessing a high degree of personal integrity,” among other traits.

Fourteen members of his shift sent a signed letter nominating him for the honor.

Close to a dozen instances where firefighters assisted in saving someone in cardiac arrest where recognized, even when those firefighters couldn’t be there to receive the honor.

Halfway through the event, an alert sound echoed off every portable radio in the room. And with the call of a fire alarm, several members of the department had to leave to assist — returning a short-while later to rejoin their families and receive their awards.

“These are actions that were taken that made a difference for members of the community,” Benson said. “It’s important to recognize that the firefighters can have courage to do something, but they need the training, the equipment, the apparatus. Where does that come from? That comes from these folks over here that support the fire department and its mission.”

The fire chief pointed while speaking to a table that included almost every city council member, as well as the city manager and two assistant managers.

“I just want to say congratulations,” Councilwoman Charlotte Moses told the crowd. “I agree with Councilman Kinlaw, we have the best fire department in the state of Texas.”

Added after was a special note of appreciation to other members in the audience.

“Husbands can’t do without that strong backbone; I’m a wife,” she said. “I know what that takes. So to the wives, hands up to you.”