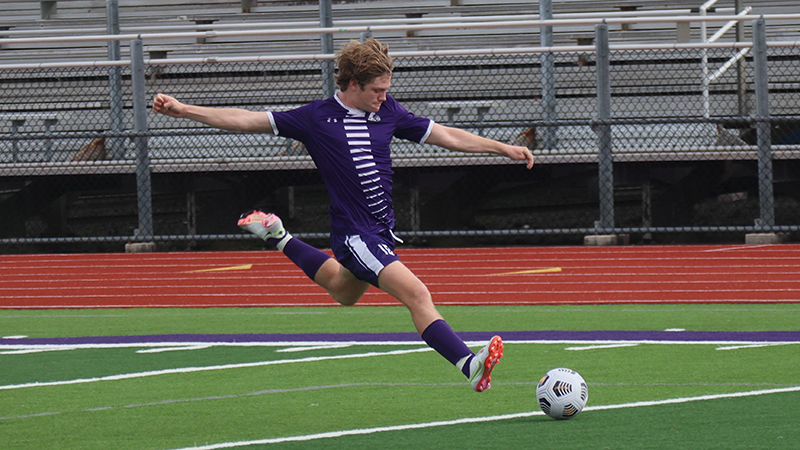 As the high school boys soccer season comes to an end, one local team has punched its ticket to the post season, while two teams have their backs against the wall.

Port Neches-Groves sits in third place in District 21-5A behind Crosby and Galena Park.

Barbers Hill currently sits in the fourth spot. Nederland and Memorial are on the outside looking in, but are, by no means, out of the playoff hunt.

The Indians will not finish the season any lower than third place and can earn a share of the district title if they win out.

“We are in third place by one point,” PNG Coach Chad Luttrull said. “Crosby is in the lead with 24 points. Galena Park is in second with 22 and we have 21.”

PNG will play Barbers Hill today before finishing the season against Galena Park and Memorial.

Luttrull said Sandell and Maldonado push each other to be better.

“We thought going into the season that we would have the best two forwards going into the district, and they are showing us that we possibly do,” the coach said.

Nederland must win two out of three games to have a shot at the fourth seed. The Bulldogs play Beaumont United today and wrap up against Barbers Hill and Galena Park.

Bulldogs Head Coach Keith Barrow said his team has played well but has a hard time finishing at the goal.

“We have struggled to put 80 minutes of soccer together,” he said. “…We are doing a good job of creating opportunities. It is just one of those things that happens in every sport. Like in baseball, we are getting runners on base and just not getting them around. We are missing layups and free throws. We are getting in the red zone and can’t score. It is just that final piece of putting the ball in the net at the very end.”

Memorial’s path to the postseason is a bit murkier.

The Titans have to win their final two games against Crosby and PNG.

“We have been looking pretty decent all year,” Memorial Coach Chris Bradford said. “We just haven’t pulled out the results that we wanted. The boys still got some fight in them. Our goal of making the playoffs has gotten slimmer and slimmer. There is still a possibility. We are in decent spirits.”

Bradford said late-game miscues have been the Titans downfall this season.

“We’ve lost five games by one goal,” he said. “We lost four games in the last 10 minutes. We’ve lost three games in the last minute. Another game, we had a 10-minute period where we went down and gave up two goals. That was the difference. If we can get that going, we could go into playoffs with some momentum and maybe make a little noise.”

“I think Maldonado has been involved in almost every goal,” Bradford said. “He has six assists and one goal. He has been pivotal to our attack.”