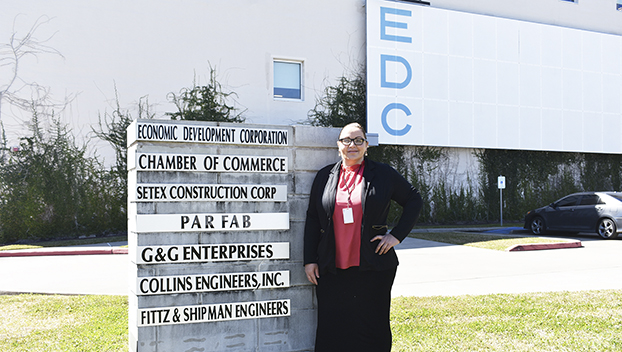 Jessica Carpenter, pictured as the PAEDC’S new CEO, is no longer with the organization. (Mary Meaux/The News)

Yet she also knows there needs to be a plan and structure before seeking those opportunities that benefit the overall community.

Carpenter is in her first week as the new CEO of the Port Arthur Economic Development Corporation. She’s working on meeting city department heads and with the city manager, as well as those outside city hall, such as industry and economic development entities.

Basically, she hit the ground running.

Before coming on board in Port Arthur, Carpenter was with Port Lavaca, where she served as the Development Services Director, which includes economic development.

She previously served as head of the Island County’s Planning and Community Development Department in Washington state, a position that also includes economic development. Prior to this she worked as the executive capital finance manager for Washington State Department of Transportation.

Carpenter has a master’s of business administration from California State University and a bachelor of science in environmental science and regional planning from Washington State University.

Carpenter is stepping into the position previously held for 17 years by Floyd Batiste. 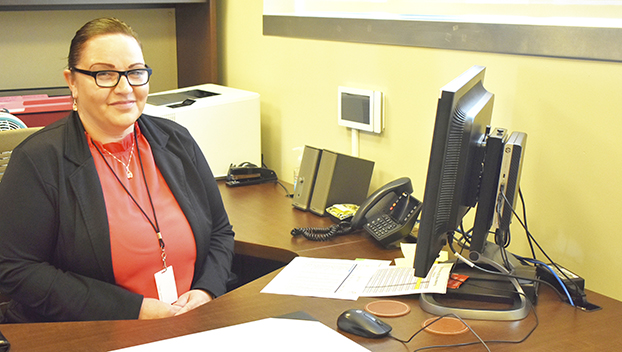 “I’m well versed in working with industries from all facets of life, whether it’s Amazon or Microsoft to oil and gas. I’m very comfortable working with tech execs to oil and gas execs to working on economic development for a region or a community,” Carpenter said.

While in Port Lavaca, which is a costal town and home to Matagorda Ship Channel, a private sector entity paid the Army Corps of Engineers to perform a deepening and widening of the entire channel.

While on the west coast, she worked with revenue and transportation ports.

“I have a lot of experience considering that’s exactly why, in my early years, I was so aggressive at strategically moving my career to enhance my skill set because everywhere you go, you have to learn local laws, you have to learn the city, county, state regulations,” she said. “Whether it’s transportation, development, economic development, you have to prove yourself each and every single time. That is what I was motivated to do in order to get the experience to prove myself. It equipped my toolbox to be able to propel myself to positions that I wanted and I went after hard.”

While moving forward she’s dedicated herself to her job.

“I’ve committed over two decades of my life to my government career, and when you get into that service mentality, you want to leave a lasting, positive imprint on a community that you helped grow it, diversify it, stabilize it in some capacity or another with economic development, land use development, transpiration, infrastructure and grants,” she said.

Jerry LaBove, president of the Port Arthur EDC board, said board members were unanimous in their selection of Carpenter.

“Ms. Carpenter brings with her a vast wealth of experience, working with both municipalities and State agencies,” LaBove said “She has the ability to bring people together.”

Mayor Thurman Bartie said Carpenter came highly recommended by the EDC board and the city council accepted their recommendation.

He plans to meet with her by the end of the week.

She was officially hired Jan. 25.

Port Arthur, Carpenter said, has many opportunities and she’s excited because she has the skill set and expertise to bring out the opportunity that is here. But this won’t happen overnight.

“You have to get organized,” she said. “You can’t just start running after something here and here and over there, especially when you’re talking about heavy hitters, large scale industry leaders.”

Planning is paramount, and in order to have a plan there needs some restricting what staff is doing internally and see how they are collaborating.

“Nothing I do is solo. I am a team player. I am a collaborator and the other experts in their professions are here in this city such as the development services, transportation engineering, utilities engineering, legal, everything,” she said. “We are a team and collectively I just want to be a part of how to make change or progress happen. I know how to do it and I want to bring stakeholders to the table to do that”

As for what she wants the community to know about her; she spoke matter-of-factly.

“I don’t have to be from a community to work wholeheartedly on the betterment of the community,” she said. “That’s one thing, because I am a government career person for the local perspective. I can come in and identify gaps and deficiencies and understand the needs.”

This, she said, allows her to evaluate from a community perspective through outreach, communication, one-on-ones with community members on what’s going on.

Because it’s about more than money or meetings, she said. It’s cultural and social. It’s about how people feel and their perspective on the economy.

“The public image is imperative,” she said. “They need to know we are working hard on their behalf, creating jobs, training opportunities for jobs and diversifying the economy, so not only are there good paying jobs in the industry but there’s also culture, entertainment, good places to eat and great shops.”