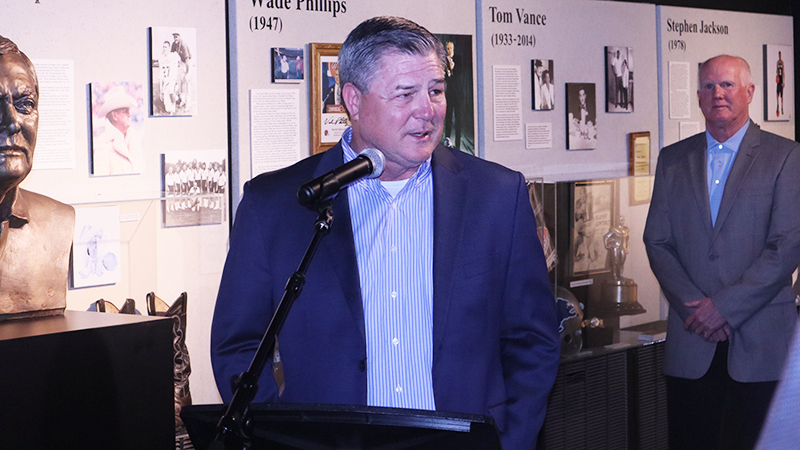 Former Thomas Jefferson quarterback and legendary high school football coach Todd Dodge will be inducted into the Museum of the Gulf Coast Hall of Fame.

The museum’s board approved Dodge this past week, Director Tom Neal said.

Dodge won seven state championships as a coach after attending one in 1980 as a quarterback for TJ. In his senior season, Dodge set the state record for passing yards in a season with 3,135 yards, becoming the first quarterback in the state to throw for more than 3,000. He also set the record for most career completions in a season, and finished with the second-most passing touchdowns in a career behind Gary Kubiak.

“I have been blessed to have a few awards, but to come back to Port Arthur and get something and be put in a place with these names is truly, truly special,” Dodge said.

Neal was happy to add Dodge to an already packed list of local sports icons.

“Today, we want to acknowledge the fact that even though we are crammed in here, we are going to add one more,” Neal said. “We have 20 more people to add to this space, so we have some challenges ahead. They have already been approved by the board. We just have to figure out a way to get everyone in here.”

Dodge was in attendance Tuesday for the Bum Phillips Coach of the Year Award, which went to LCM Head Coach Eric Peevey.

The LCM coach was the last coach to beat Dodge in the playoffs back in 2018 when Peveey took West Brook to the 6A State Championship game.

“About four years ago, (Peevey) tagged one on me when we played West Brook in the state semifinals when we played at Katy Stadium,” Dodge said. “I told him that if I was going to lose to anyone, I would rather lose to someone from Southeast Texas. They sure put one on us that day.”

Dodge’s teams went 45-1 (18-0 in the playoffs) since that loss. Dodge won seven state titles (four 5A titles and three 6A titles) as a head coach. He retired from Westlake High School at the end of the month. During his time there, Dodge won three consecutive state championships.

Dodge said he looks forward to get into consulting, similar to how he assisted Port Neches-Groves in their search for a head coach and athletic director.