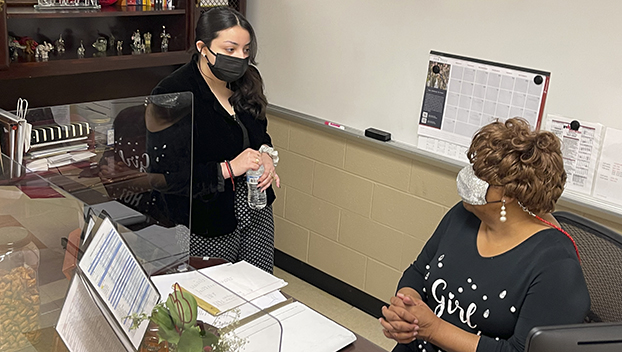 Nataly Salomon’s school day is a little different than most. The Memorial High School student, who attends the Career and Technical Education Campus, spends the first half in class and the second half at work — all under one roof.

As a vocational office education student, Salomon is spending her senior year preparing for the workforce while also being in it.

“They learn more than just being a professional but what is expected in the real world, so when they go out to these jobs…they’ll know how to act, how to deal with certain situations, take criticism, improve once they’ve been given some type of information,” said Gretchen Buchanan, vocational office education coordinator. “And if they want to learn something they’ve been doing at work, they can come back and ask me.”

VOE students work inside the district, as well as out, with some employed at credit unions and, even, refineries.

And the class that teaches everything from digital communication to finance is Salomon’s favorite. 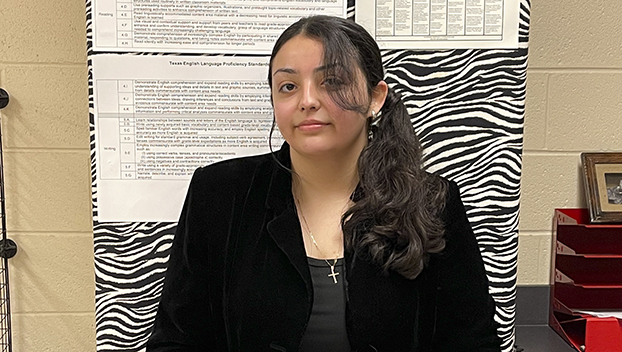 “I like VOE a lot because I get to learn about office work, professionalism,” she said. “It’s something I enjoy very much. I would do it as a career, too.”

But that’s not the career she’s planning for.

Salomon plans to work towards becoming an attorney, first by attending Lamar University to earn a bachelor’s degree in Criminal Justice.

“I got into that in middle school,” she said. “That’s when I pretty much decided everything I wanted to do.”

It was the same for VOE; she set her sights on it after an 8th grade counselor spoke to her about it.

It seems the teen born in New York but raised in Port Arthur since before her second birthday doesn’t miss what she sets her sights on.

The educator described Salomon as intelligent, punctual, an overachiever and dedicated.

“She takes care of what she’s supposed to in that front office,” Buchanan said. “They don’t mess with her. If Nataly says, ‘you’re tardy,’ you’re tardy.”

While she doesn’t have a lot of spare time at the moment as she prepares for graduation, Salomon enjoys reading and playing the piano.

The latter is something she’s been teaching herself to do through online tutorials.

“I decided to learn it because during the pandemic I had a lot of free time,” she said. “It’s just something I picked up because I got interested in it.”

Buchanan credited that motivation as just another great quality in her student.

“I wish I could Xerox her, make a few more copies and keep her,” the teacher said with a laugh. “I hate to see her leave. She’s one of those. They rely on her a lot in the front.”