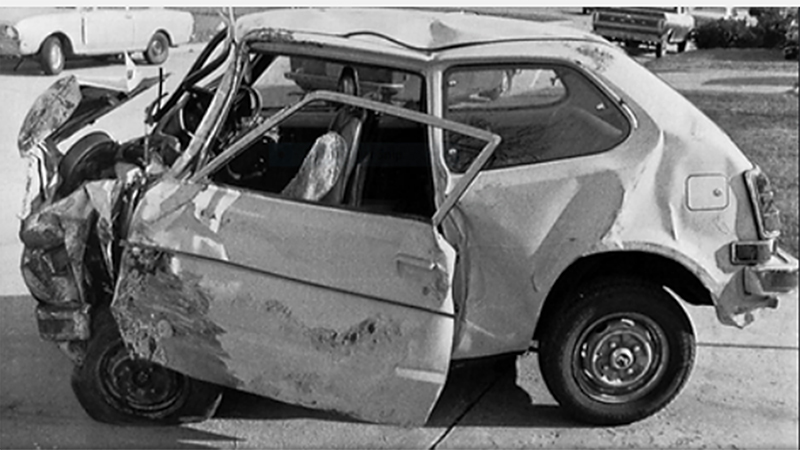 A picture of Karen Silkwood's car after the crash. (Courtesy photo)

If Karen Silkwood hadn’t been killed in a car crash while en route to meet with a New York Times reporter and a union rep with alleged proof of safety violations at the nuclear plant she worked at, she would be 76.

It’s ironic in a tragic sense that the unexplained plutonium exposures she endured while a lab technician at the Kerr-McGee nuclear facility weren’t what caused her demise.

But the former Nederland resident died at the age of 28 in the one vehicle crash in Oklahoma. The documented proof she was to give over to the reporter was not found in her 1973 Honda that had crashed into a concrete culvert.

Skid marks showed she had run off the road Nov. 13, 1974 but initial reports say she did after falling asleep at the wheel of her car. An Oklahoma Highway Patrol investigation and a medical examiner’s report showed no indication of foul play and instead blamed her falling asleep at the wheel due to a “heavy sedation of methaqualone,” which she was taking for a back injury sustained in a car crash two weeks prior, according to a Port Arthur News archive story published in January 1979.

Controversy surrounded the death of Silkwood, who was an active member of the Oil, Chemical and Atomic Workers Union. Investigations were launched as were lawsuits and the story was told in a major movie in 1983 starring Meryl Streep as Karen Silkwood, Cher as her roommate Dolly Pelliker and Kurt Russell as her boyfriend.

It was actually a Facebook post made by the Museum of the Gulf Coast on Feb. 19 that had me thinking about her.

I read of the lawsuits and appeals and of the family’s grief. I learned that in 1986, 12 years after her death, a civil suit was headed to retrial when it was settled out of court for $1.3 million, according to information from the Museum.

I also learned that in 2014, Silkwood’s story of environmental problems at Kerr-McGee was pretty much proved true after a change of ownership, some subsidiaries added, a bankruptcy and later, millions of dollars for cleanup of multiple sites.

Karen Silkwood’s story has always intrigued me, angered me and even frightened me a little. Here was this woman making safety claims against her employer. She had the strength of the union behind her. People around her at the time knew what was going on. And she said she had proof.

But can you imagine if she had lived to meet with the reporter and the story and evidence made public?