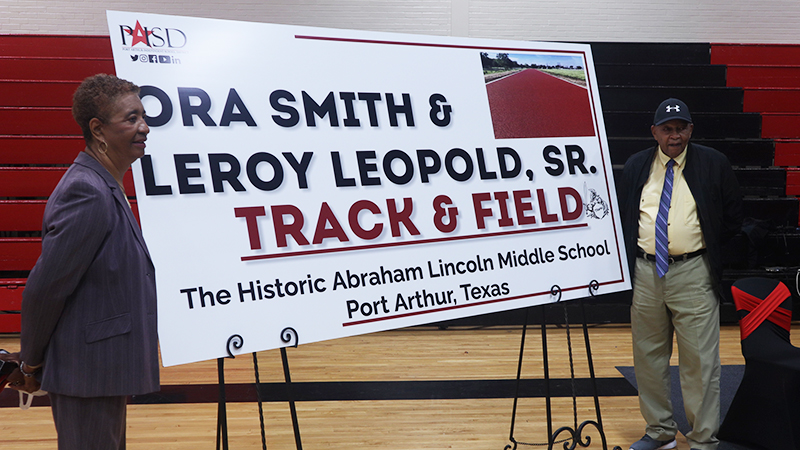 Former track coaches Ora Smith and Leroy Leopold stand next to the sign that will go in front of the renovated at Lincoln Middle School. Chris Moore/The News

Two Port Arthur track and field legends were on hand Wednesday for the naming of the track at Lincoln Middle School.

The Port Arthur Independent School District board voted to name the track after former coaches Ora Smith and Leroy Leopold.

Both coaches reflected on their time at Lincoln when it was one of the city’s high schools.

“I love Lincoln High School,” Smith said. “I love my P.E. classes. I love my track girls. They were like my girls. They were family. Since then, I have been away and when I reflect on my career here. I loved it.”

Smith began her career in PAISD in 1978 and stayed at the school for 26 years. During that time she took student athletes to state meets 25 times to compete in track-and-field events.

“I am really happy for what is going on around here,” she said of the facility upgrade. “I appreciate the name Ora Smith and Leroy Leopold. I almost considered coming back, but I can’t.”

Leopold, who is a lifelong resident of Port Arthur, graduated from Lincoln High School in 1954. During his career, he coached the track team to a state championship in 1971 and accumulated several runner-up finishes.

“I was here when the track was dirt,” Leopold said. “I am here from the Cretaceous Era. The city would come out with a grading machine and cut a path around this thing. We ran on that, but when it rained and so on, we couldn’t practice because of the mud, so we ran in the building.”

The PAISD school board elected in January to name the track after the two coaches. The board received more than 320 submissions before settling on Leopold and Smith.

Upgrades to the facility were completed late last year as part of a bond.

Superintendent Dr. Mark Porterie said the school has a rich history in the Port Arthur community.

“It is because of the Port Arthur community that we were able to renovate the track,” he said. “Your votes gave us the money to do it and build beautiful schools and renovate other schools in the district. We have the best schools in Texas, and our children deserve the best. Finally, the track has been renovated, and it is beautiful. We want our community to come and walk and run. We want our track students to practice.”

Granger was a student athlete and assistant coach for Leopold before taking over the program at Memorial.