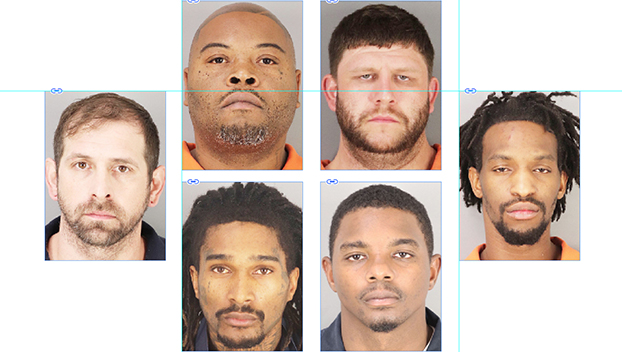 A Jefferson County grand jury has indicted six men in separate crimes where they were illegally in possession of guns.

Some of the charges go hand-in-hand with drug charges while others are associated with violent acts. All involve individuals who are convicted felons who allegedly were in possession of a firearm.

Elisha James, 30, of Beaumont was indicted on charges of unlawful possession of a firearm by a felon, two counts of aggravated robbery and aggravated assault.

According to court documents, James went to the residence of a person he knew and kicked the door in while holding a handgun on Jan. 16. He left then returned a second time where the victims claim he was more violent.

A woman was hiding in the bathroom on the phone with emergency services when James entered and allegedly pointed the gun at her and demanded her phone. He then took the phone and put it in his jacket.

The reported suspect then walked over to a second person in the apartment, pointed the gun and demanded this person’s phone. The second person refused.

That’s when, the victims told police, James said “everyone is going to die in this apartment.”

By this time a second man who was accompanying James came in and said they needed to leave. An argument ensued and James reportedly walked over to one of the victim’s vehicles and fired his gun several times, then pointed the gun at the witnesses and said he would return.

Police did locate the vehicle with the two men but a chase occurred, ending in a crash t the intersection of Kenneth and Florida. A Smith & Wesson 9mm gun was found IN the vehicle where James had been seated and there was reportedly a large box of 9mm ammunition in his pocket.

After receiving medical clearance, James and a second man were arrested and brought to jail.

According to court documents, on Sept. 10 Beaumont police were called about a suspicious vehicle on North 11th Street.

A female said Campbell left her inside the vehicle while he went inside of the hotel and while talking, the officer reportedly saw a handgun under the driver’s side seat along with a digital scale.

An officer stopped Campbell as he left the hotel and reportedly consented to a pat down search. He had a hypodermic needle in his right pocket and a plastic baggy with crystal methamphetamine in the other pocket.

Campbell is a convicted felon and law prohibits him from possessing a firearm. He was charged with unlawful possession of a firearm by a felon as well as for the drug charge.

He is also indicted for delivery of a controlled substance for an incident that occurred Sept. 17 in which he allegedly sold narcotics to an undercover officer. The drugs were turned over for testing and included 3.778 grams of meth as well as a brown powder substance that tested positive for fentanyl, heroin and tramadol at 0.276 grams.

On Nov. 10, police stopped a vehicle for failing to signal a right turn on Milam Street and Campbell was a passenger inside. During a pat down search, officers reportedly found drugs and needles in his pocket. A probable cause search was performed that led to the discovery of a bag with methamphetamines near his crotch in his underwear. While in the backseat of the patrol unit he reportedly tried to destroy more meth on his person that had not been located.

He remains in the Jefferson County Correctional Facility on numerous charges.

Clarence James Crawford, 29, of Silsbee was indicted for unlawful possession of a firearm by a felon.

Crawford was reportedly driving a vehicle Dec. 5 with an expired license plate when stopped by Beaumont police. He made a statement of having weapons in the vehicle, which included a short barrel 12-gauge shotgun, which was near his leg, and two other shotguns in the backseat, all within reach, police said. As a convicted felon he is prohibited from possessing a firearm.

Kelvin J. Frank, 28, of Beaumont was indicted for unlawful possession of firearm by felon for an incident that occurred Nov. 30.

Frank was stopped by Beaumont Police for speeding and was found to have active warrants for his arrest.

During the search police reportedly found a loaded magazine with 9mm ammunition and a 9mm gun under the driver seat.

Grady Brian LeBlanc, 39, of Beaumont was indicted for unlawful possession of firearm by felon and possession of a controlled substance, methamphetamine, for incidents that occurred May 15, 2020.

LeBlance was pulled over by Beaumont police for not signaling a turn onto Highway 90. A passenger in the vehicle with him was arrested for several outstanding warrants. LeBlanc was arrested on a charge of unlawful possession of a firearm by a felon after reportedly telling police about the weapon.

During a pat down he was found to have meth in his pants pocket.

He remains in the county jail on a number of charges.

Nikia Jabrock Smith, 44, of Beaumont was indicted for unlawful possession of firearm by a felon for a Jan. 19 incident.

Beaumont police stopped the vehicle Smith was in for not having a front license plate. During the traffic stop, an officer allegedly saw a handgun in the vehicle.

After the occupants of the car were removed, police reportedly saw a black and silver Taurus gun wedged between the driver seat and center console with the handle exposed and the barrel facing the ground.

Smith is a felon having previously been convicted of aggravated robbery in 1998.