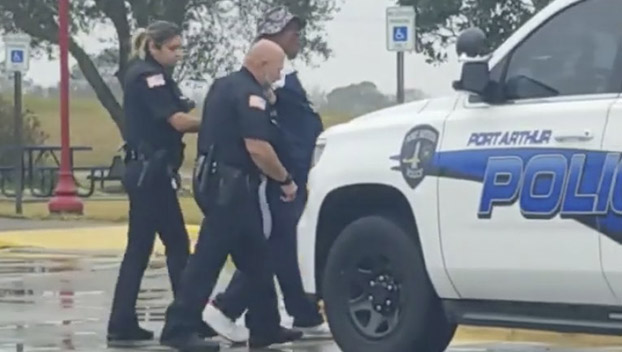 An altercation between two campaign supporters led to one detainment Thursday at the Port Arthur Public Library.

In a video shared with Port Arthur Newsmedia by Joseph L. Guillory II, a candidate in the Justice of the Peace Pct. 2 race, a man who was on site with his opponent came to his table and shoved a sign in the direction of one of Guillory’s volunteers.

The sign hits the man’s phone, which then falls to the ground.

Guillory is running against current Justice of the Peace Pct. 2 Marc DeRouen, who was not on site at the time of the incident.

Both candidates commented on the issue.

Guillory, who said he was also pushed during the altercation, said the man has been confrontational all week.

“This is why I’m running,” he said. “This is what our children in school are facing every day — bullying. Bullying is a sad thing. Anytime you beat up on the little guy, it’s just a sad situation.”

DeRouen said he believes it was a personal matter between two individuals.

“I’m running a positive campaign and it’s unfortunate that something of this nature had to happen,” he said. “It’s not a direct reflection on me and the office I’ve held for the last 11 years.”

The JP did confirm that the man who was detained returned to the library within hours of his arrest.

Port Arthur Newsmedia has asked for comment from the Port Arthur Police Department regarding details on the handcuffed man’s potential charges and release.