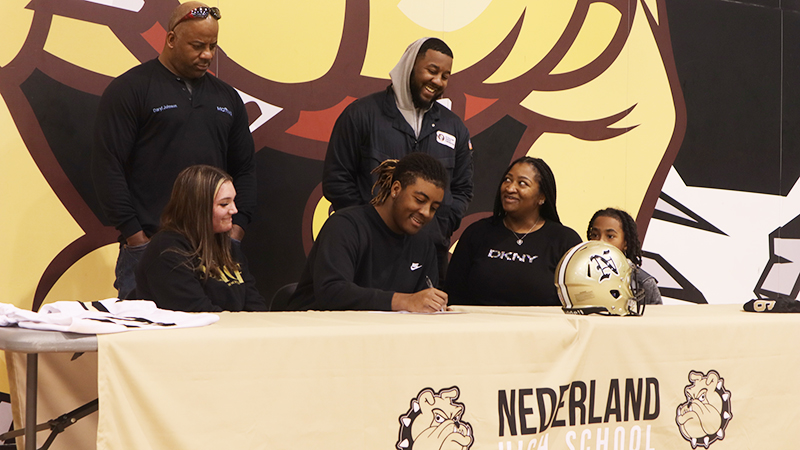 NEDERLAND — The Nederland Bulldogs added another college signee to their ranks Thursday as offensive lineman Ricky Johnson signed a letter of intent to play at Blinn College next season.

The left tackle celebrated the occasion with friends and family in the Dog Dome in front of teammates and fellow students.

Johnson, who played on varsity for four years, said his favorite memory was beating rival Port Neches-Groves in the Bum Phillips Bowl in the fall.

“I will never forget that,” he said. “I get to leave with the Bum Phillips Bowl trophy my senior year.”

Johnson said he was happy to finally put his name to paper and commit to playing college football.”

“I’m glad that these four years paid off and I finally get to go play somewhere,” he said.

Johnson said no play in particular stands out from in his time with the Bulldogs.

“I don’t have a favorite play, because I have done it so much, but any play where the other guy came off the ground and I get on them is my favorite play.”

Nederland Head Coach Monte Barrow said he is proud of Johnson and everything he accomplished during his four years.

“He knows where he is heading,” Barrow said. “I could tell a lot of stories about Ricky. To see what he has grown into these last four years is the most pleasing thing for us. He showed up every day with a smile on his face, and there is something about a big guy with a big smile on his face. It makes everyone feel a lot better.”

Barrow said Johnson also knew how to flip the switch and get serious for a game or practice.

“That is something that is important as a football player,” he said. “He will represent his family and our city at the next level. I know we will be proud that he will represent us. Blinn College is lucky to get him along with whoever or whatever is after that.”

The Nederland senior chose to go to Blinn because of how dedicated the coaches were to getting the best out of him.

“I liked everything they were about,” Johnson said. “I talked to the coaches. They said they would be on me about my academics, my physical strength and all of that. I am ready to hone my skills with them and eventually go D-I.”