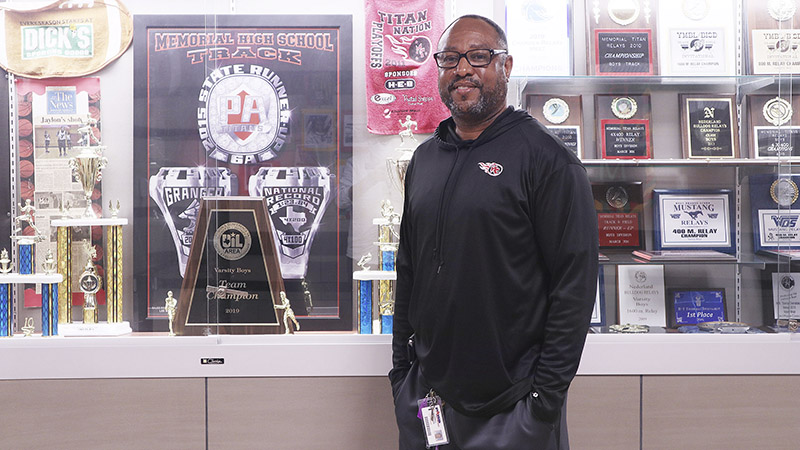 A couple of years ago, a friend told Memorial Track Coach Darrell Granger that he should look over his portfolio he presented to the school when he applied for the position.

It had been nearly 20 years since he had even thought about the paper, but he decided to give it a look.

“He told me that I need to go back and look at all of the goals that I wanted to accomplish as the head coach,” Granger said. “I went back and read that and I started checking off everything that I had put on that paper almost 20 years ago. To see all of those things happen for this program really makes me proud.”

Since 2006, Granger has overseen one of the more successful track programs in the state, as well as received national recognition for coaching one of the fastest high school 4×100 relay teams in the nation’s history.

Granger, who was born in Port Arthur in 1968, said he remembered watching high school track meets as a child.

During his senior year at Lincoln, Granger took home the gold medal at state in the 400-meter race.

Granger and the Lincoln team also won state for the mile relay, breaking the state record with a time of 3:11.7, which they held for 20 years.

“My first year of college was a big transition, but I knew I could compete with those guys,” Granger said. “I had some guys go before me that told me how it would go. My junior year, we went to nationals. One of the highlights of that year was when we went against Baylor, who had the mile relay streak for forever and we beat them. That was a big accomplishment.”

Granger thanks his coaches for molding him on the track. 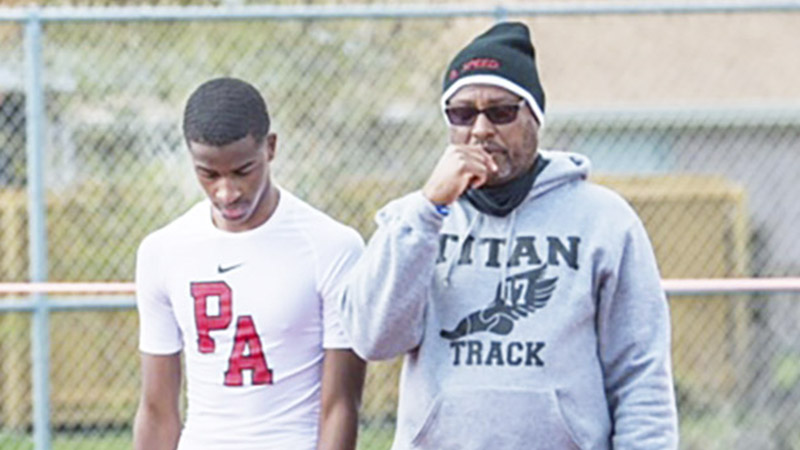 Darrell Granger, right, talks to a student-athlete during a track meet. (Courtesy photo)

Back to Port Arthur

After graduating from college, Granger returned to Port Arthur contemplating his next move. He earned a teaching certificate and began teaching at Sam Houston Elementary. During that time, he was coaching football at Woodrow Wilson and was an assistant coach for the Lincoln track program under Coach Leroy Leopold.

Granger took over the program in 2005 after the legendary Coach Leopold retired.

The track program struggled to find its footing for a few years but began to turn around in 2014 with a talented group of runners.

“It really took off with Corey Dauphine, Kam Martin, Jacorie Jones and Quantae Conners,” Granger said. “I can say the peak of Memorial track started then.”

Granger thought that team reached as close to the pinnacle of what high school track could produce. Then, 2017 happened.

During the season, other coaches told Granger his 4×100 team of Ireon Brown, Xavier Hull, DeAndre Angelle and Kary Vincent Jr. had potential to record a time that would compete for the national record.

“My mindset was that we had a really good team and we will see where it takes us,” he said. “…I had other coaches telling me we would run 39 seconds and I had never seen that. We have had good relays but I have never seen a team run under 40 seconds in my life. If you run 40 seconds, you are going to be in the state finals and a chance to medal.”

“We had two weeks to get ready,” he said. “That break provided a little time to get your body right.”

The Titans came away with first place and Granger said he did not time the races on his watch, opting to just look at the scoreboard. As the Titans crossed the line, Granger and the entire stadium saw the record time of 39.8 seconds on the scoreboard.

“When I saw the big board, I literally grabbed all of my stuff and took off running towards the award stand to meet my guys,” Granger said. “I knew they did something that was really special because the crowd went crazy when they saw the clock.” 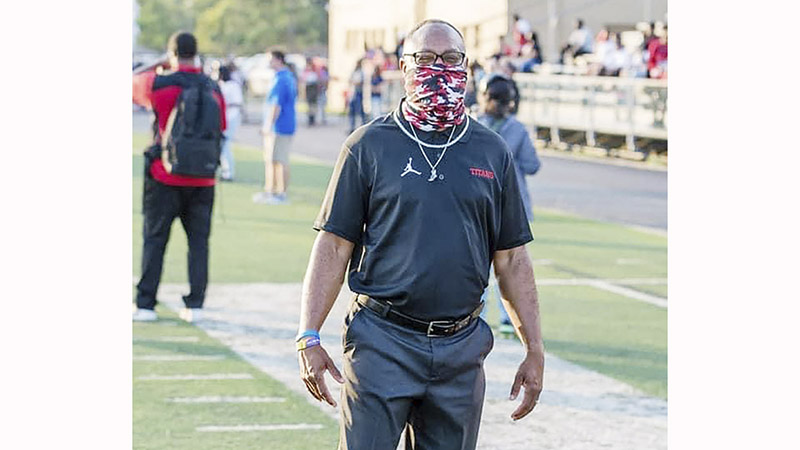 Darrell Granger has been the track coach at Memorial High School since 2005. (Courtesy photo)

Granger does not know how much longer he will coach, but added if he stopped today, he would be happy with what has been accomplished.

After checking off every goal on the list he made nearly two decades ago, Granger said one thing pushes him to keep going.

“I do it because of the kids,” he said. “This is my home. I have seen coaches come and go. This is where coaches gave me a chance when I was growing up, and I want to be the same type of coach that stays here and gives these young men a chance to be successful.