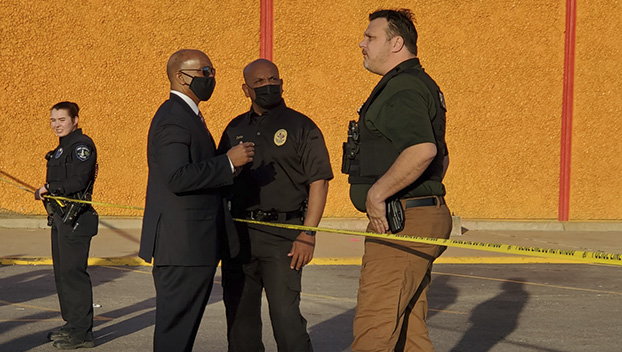 Not to sound too cliché, but things can change in the blink of an eye.

Last week I was enjoying my time talking with a Nederland woman about her beautiful dog when my phone began to blow up. A relative was calling, and since I was on an assignment, I slid the bar on the phone to stop the call.

But the calls and texts kept coming. So as soon as I got to my car to leave, I checked. The relative was telling me either one or two children from Thomas Jefferson Middle School had been shot. There was, of course, Facebook speculation as to what happened and the stories varied.

Either way, I called our editor to tell her about a possible shooting at or near the middle school and headed from the fun, relaxing dog assignment to something that could have been deadly.

But that doesn’t take away from the seriousness of what happened in the parking lot of a shopping center adjacent to the middle school.

Police and Port Arthur Independent School District officials were on scene when I drove up and parked. Yellow crime scene tape was stretched in an odd formation from one police car to another to one of the pillars of the store.

I later found out two teens had been shot and their injuries were not life threatening. A suspected shooter, identified as 17-year-old Jose Cortez, was later arrested.

As the investigation progressed a female who said she was a student in the district had a cell phone video that showed what appeared to be the beginning of a fight between two boys. They were surrounded by other people who appeared to be young teens that were shouting.

Another video came to light hours later that showed more of the fight and also pictured a third male entering the fight. A man in a suit that I assume was a school administrator leapt into action as the boys were fighting up against a pillar of the store. But, if the action is slowed down, you can see a weapon in one of the teen’s hands and hear the pops of the gun as shots are fired.

Though I wasn’t on scene when the shooting happened, I could superimpose those images over what I saw in front of me. Then the parent in me kicked in and I saw, if only in my head, two children being shot by a third child. Yes, the alleged shooter is 17, but I have a good 40 years of life more than him.

I don’t know the circumstances that were behind the shooting. I don’t know if one of the children were bullied. I only wish for peace.

I’m tired of seeing violence in our city — in my city.

I don’t know what the answer is to the problem but it needs to stop.