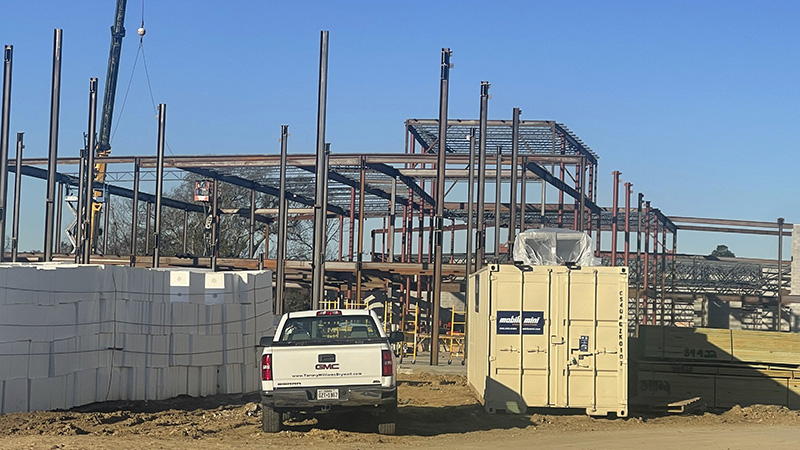 Work on two intermediate schools — one in Port Neches and one in Groves — is on track to open for the next school year, and contracts for construction on two elementary schools have been awarded.

The district this week gave an update on the 2019 bond issue, which consolidates four Groves schools and three Port Neches schools into four campuses. Each city will have one pre-K-2nd grade school and one 3rd-5th grade school.

Gary Whittle, project management director for CBRE Heery, told board members exterior work on the Port Neches intermediate school began Tuesday and should begin in Groves by the end of the week.

The two-story schools are under construction near Woodcrest Elementary and the former West Groves Education Center site.

However, they have experienced challenges with weather, a universal increase in costs and a shortage of building materials.

“We continue to see market escalation and material delays,” he said. “We deal with it every week. Sometimes we’re finding alternative materials, alternative suppliers. In some cases we reschedule to make sure that keeps us on track. We believe we’re still on track for an August open.”

Superintendent Dr. Mike Gonzales said the district has made adjustments to continue work despite an increase in cost.

“The prices are going up, so the longer we wait, the worse things are going to get,” he said. “We passed a $130 million bond. It may cost us a little more than we expected but we held a strong fund balance where we can cover that.”

Gonzales said the current facilities are 70 years old, so the new construction is viewed as a 70-year decision.

“If we have to invest in an extra $3 million in every school, and we have to take that out of fund balance, I think that’s well worth it,” he said. “Especially since you’re investing $3 million and that is going to pay itself off over 70 years. We have a strong fund balance, so we can finish the schools and give the community exactly what we told them we were going to provide them.”

ICYMI: See what the new PNGISD primary schools will look like

Last month the board was presented with renderings of the buildings, both externally and internally. These two schools will not be two-story, and therefore will be about 100,000 square-feet in size.