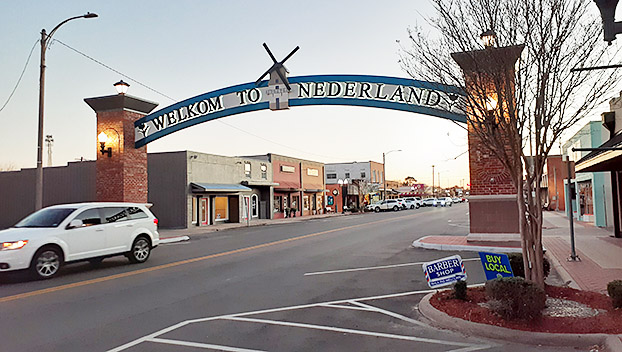 A vehicle passes through the “Welkom To Nederland” arch. (Stephen Hemelt/The News)

NEDERLAND — The road to completing the “Welkom To Nederland” arch has not been a smooth one.

However, the Nederland City Council voted unanimously Monday night to accept ownership of the Boston Avenue structure contingent on the final completion of a punch list.

The city council approved construction of the $179,200 archway late in 2020 after the EDC touted it as a showpiece and talking point that would create a grand entrance for a redeveloping downtown.

In November of 2021, EDC Executive Director Kay DeCuir told EDC board members some of the city’s requests for final acceptance are nitpicky, and a possible but unlikely worst-cast scenario could be dismantling the arch and doing away with the project.

“I know there has been this narrative that the city is creating a moving target or nitpicking on this thing when, in fact, we have been talking about the same problems for months and they haven’t been fixed.”

“We agree these three things are the last three things that need to be done,” he said. “They are pretty straightforward.”

In addressing to the city council Monday night, DeCuir said the itemized repairs could be completed but would require the street to be closed around the arch for two days over one weekend. An exact time for when the closure would take place was not discussed.

She said repairs would come with a multi-year warranty and would cost an additional $6,300. Upon completion, she said an official ribbon cutting or ceremony would not be needed because everyone already knows the arch is operational.