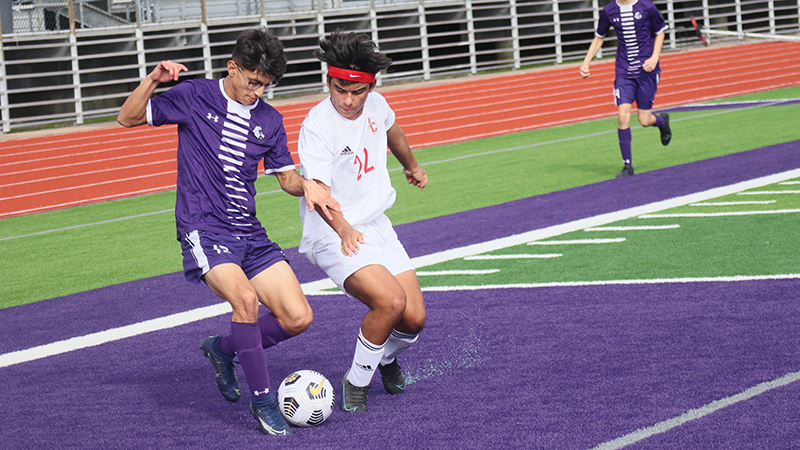 PNG's Maddox Proenza tries to get by a defender. (Chris Moore/The News)

PORT NECHES — The Port Neches-Groves boys soccer team is off to a hot start this season thanks to well-rounded performances on both sides of the pitch.

PNG started the season at 12-2-2 with the only one loss in district coming at the hands of Crosby.

The 2-1 loss to the Cougars was the first district match for the Indians, who have rattled off four straight wins since.

“We are playing well right now,” Head Coach Chad Luttrull said. “The kids are fighting and playing hard. They are executing the game plan, which changes depending on the opponent.”

Luttrull said his team has been balanced with good play on offense and defense.

“Our defense has been really stingy,” he said. “We have be playing well on both sides of the ball… The kids are playing extremely hard and they are starting to understand that they can really turn some heads.”

On the offensive side of the ball, Tate Sandell and Jesus Maldonado have each recorded 20 goals.

“We are just doing everything Coach tells us to do,” Sandell said. “He always sets us up with a pretty good game plan. We trust the process, and it is clicking for us right now.”

Sandell said there is always room for improvement and added he would like to see the chemistry improve.

“There is always a time where you question one another, but if you trust your teammates, we get that bond,” he said. “If you can get to a point where you can criticize your teammate and they know you are trying to make them better, that is when you are a dangerous team.”

The Indians play Memorial Tuesday before starting the second half of their district schedule.

PNG’s rematch against Crosby is set for Friday at The Reservation.