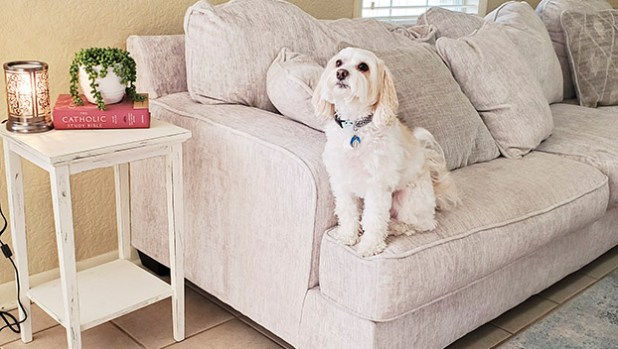 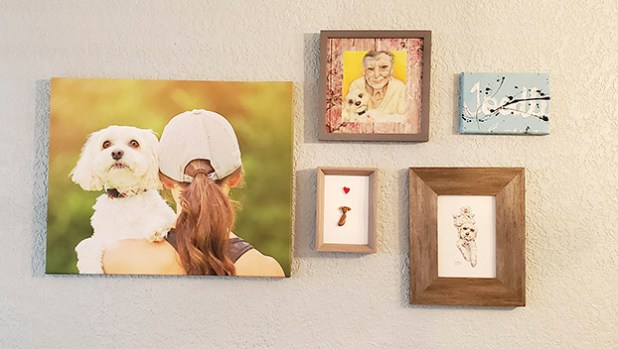 A professional photo of Toodle and Tate, left, and other memorabilia. (Mary Meaux/The News) 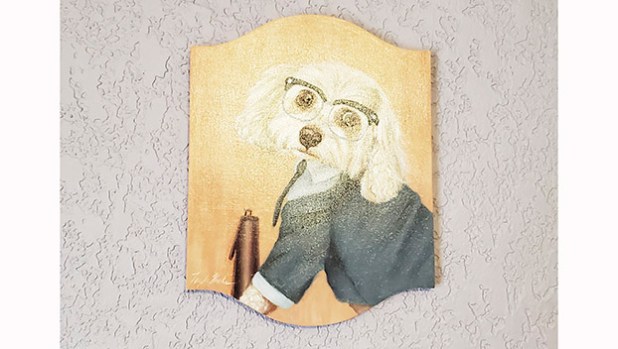 A painting of Toodle as a human by Taylor Balsano. (Mary Meaux/The News) 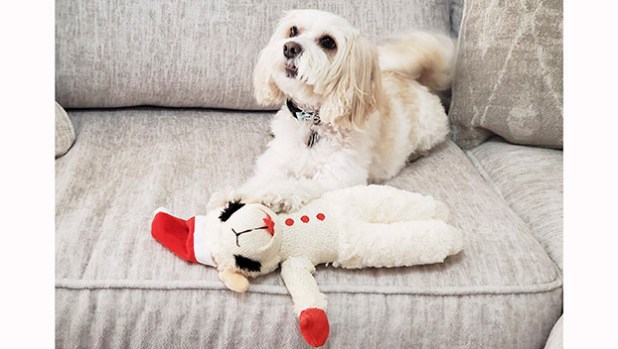 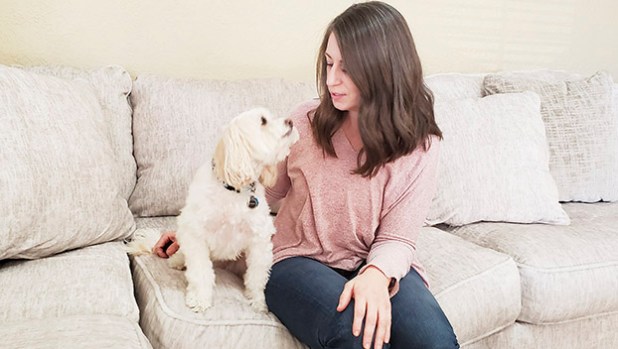 Kristen Tate shares a moment with her dog Toodle McNoodle earned the title of Cutest Pet in the Cutest Pet Contest from the Port Arthur News in conjunction with Pippa’s Closet Boutique this week. (Mary Meaux/The News)

He spends his weekdays watching traffic from the living room window and is ecstatic when his owner, Kristen Tate, comes home from work. When she’s not working as a sixth grade math teacher at Port Neches Middle School, the two hang out together and like besties.

When Tate learned her faithful companion was the top pet in the contest, she was taken aback.

“I was pretty surprised just because there were a lot of pets on there,” Tate said of the panews.com page where people could scroll through the entries and vote for their favorite. “I mean, ultimately, I think he’s pretty adorable.”

Toodle came into her life after her previous dog, which was her first adult pup had to be put to sleep. She started searching for another companion and eventually found a small, mostly white dog that caught her attention. The dog had been rescued from Houston and was living with a woman in Nederland whose family just didn’t have time for him anymore.

“He’s totally opposite of my other dog. He loves attention. That’s his main thing, if he has a person, he’s good,” she said. “And he hates dogs. He. Hates. Dogs. He doesn’t want to share attention, but people, babies, kids… yes.”

As she spoke, Toodle vied for her attention but wasn’t pushy about it. She found his favorite toy, Lambchop, tossed it across her Nederland living room and the dog zoomed to it and rushed back with it. She believes he is approximately 7-years-old.

When she first got the spunky pooch, his name was Toby. She’s not a fan of dogs with human names so, back when she was teaching at Central Middle School in Nederland, she asked her students for name suggestions.

“I think it was one of the names they gave me and that’s the one I went with because it’s ridiculous and he’s such a foo-foo ridiculous dog,” she said with a smile.

Tate owns and runs Toodle-loo Sewing Company, which is named after Toodle. The dog mom sews in her spare time and makes keychains, dog and cat collars and other crafty sewing products.

Toodle, she said, is her somewhat reluctant model for many dog products and he’s not a fan of the dog bandanas.

“I make the bandanas, he hates them. I put them on him and say act like you like it. He’s like (serious face). He’s the worst model,” she said with a laugh. “I have all these outtakes of him making these scowl faces and I’m like this won’t work.”

Her crafty business is obviously named after the pup. To drive home that point, there is a small painting of Toodle McNoodle as a “human” in her craft room. The work was done on a wooden panel by Taylor Balsano as an assignment for school. Wearing a suit and glasses, the doggie CEO is dressed to run the business.

The “Sweet, cuddly” dog has earned a spot as a family mascot and Tate’s nieces and nephews love him. He does get dressed up for the holidays and was even an elf last Christmas.

The middle school teacher knows the students like Snapchat, a messaging app, so they have a Toodle “Snap of the Week” in the hallway featuring the dog with filters on his face.

The contest winner has nicknames that Tate affectionately calls him; Tootle, Tootie Toot Toot and Noodle.

His sweet disposition comes in handy when Tate visits her grandmother, who is somewhat bedridden. He also gets to go on car rides and walks on a leash.

The pet contest came about when Candace Hemelt, marketing representative for Port Arthur Newsmedia, was speaking with Debbie Sanders, owner of Pippa’s Closet Boutique. The two women were talking about photo contests when Sanders suggested pets as the topic.

Submissions were accepted through Jan. 16 with voting taking place until Jan. 31.

Sanders was happy to see the interest generated by the contest.

“Our pets bring us so much joy, especially with the world crazy like it is. It’s just fun to see people enjoying their pets and talking about them,” Sanders said.

The boutique offers a variety of clothing and treats, both sweet and savory, in all price ranges, full-service grooming and nail trimming and self-serve dog wash/spa.