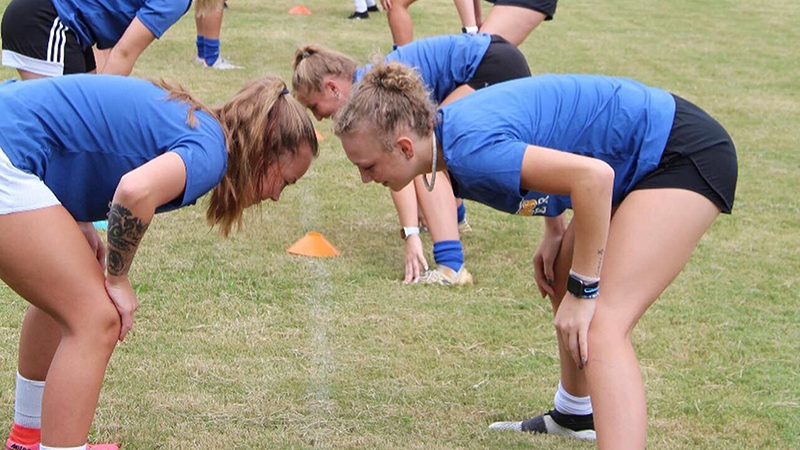 A year after graduating from Nederland High School as a two-sport star, Rylee Bolser is still playing soccer and volleyball at a high level at her South Carolina college.

Bolser, who committed to play for the University of South Carolina-Lancaster, earned All-Region honors in soccer in her first season.

While the former Bulldog had other offers to play college sports, she chose USCL because she would be allowed to carry on her duel-sport title. She referred to the scholarship offer as a “blessing.” 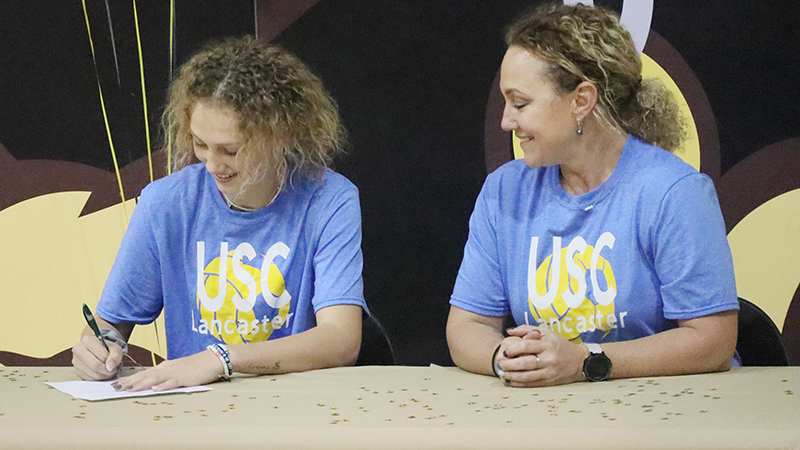 Nederland’s Rylee Bolser, left, signs a letter of intent at the Dog Dome to play soccer and volleyball for the University of South Carolina Lancaster. (Chris Moore/The News)

Her focus during freshman year was to keep her body healthy and strong.

Bolser, who majors in kinesiology, said playing two sports is difficult and added she had to juggle practice and keeping up with school.

“My hardest struggle during school was making time for school and keeping up with my grades,” she said, “…I have to be mentally and physically right at all times.”

Away from athletics and classrooms, Bolser has to deal with living so far from home in a new place and culture.

Those struggles haven’t impacted her performance on the court or field.

In soccer last fall, the USCL freshman was named All-Region and helped lead the team to a 6-3 region record.

In volleyball, her teammates described her as a “dependable, hard-working” player. Bolser helped the team bring in 122 kills and 25 blocks during the fall season.

“Rylee is a hardworking volleyball player and determined on and off the court,” volleyball teammate Ally Hall said.

Hailey Mock, who also played volleyball with Bolser, described her as an “amazing ball player and always dependable.”

She played both sports all four years at Nederland.

Her favorite memory during high school soccer was going into the fourth round of playoffs. During high school volleyball, she loved having overnight tournaments and spending time with her fellow teammates.

Bolser said her favorite memory playing USCL volleyball last fall is “the bus rides to and from volleyball games because we all had good bonding moments.”

USCL soccer coach Kenneth Halas describes Bolser as a “big contributor” to the soccer team, playing as a defender and as a midfielder.

Bolser played an important role when the team moved to three backs late in the year.

“She was also named to the All-Region team as a defender, so it was clear to others how much she was impacting the game,” Halas said. “She really helped us over the season by using her athleticism to win 50/50 balls and keep our possession for our team. Her ability to also finish set pieces near the goal was a major advantage. Overall, she is a very big impact player for our program, and we are looking forward to great things for her next fall.”

“As an athlete, Rylee is quick and explosive,” Van Lieu said. “She has a great vertical and hits the ball with a lot of power.”

“I wish for both my teams to excel in wins and stay consistent,” Bolser said. “I wish to get better and always keep my passion for the two sports I love.”