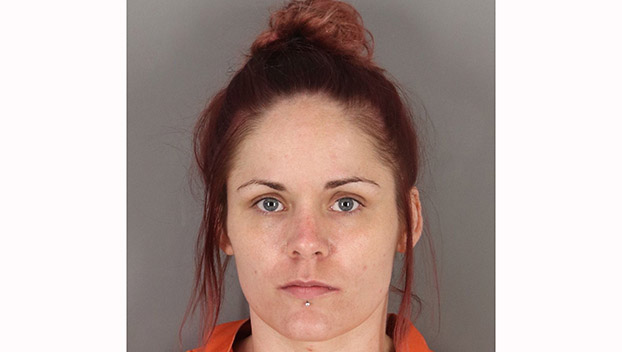 A plastic baggie tossed out a truck window, a clothes hamper with a gun and a container with drug residue that the owner claimed was due to a volcano experiment all ended with the arrest of a Southeast Texas woman.

A Ford truck with expired paper tags and no front license plate was reportedly seen pulling a Suburban with no rear plate in the area of Highway 90 in Jefferson County when a sheriff’s deputy said a clear bag came out of one of the vehicle’s driver side windows.

A deputy stopped and saw the empty baggie that reportedly had crystal residue believed to be methamphetamine inside, according to a probable cause affidavit.

A male, along with Stormy Nicole Folwell, 29, of Nome, were in the truck while another man was in the suburban, according to court documents.

The man in the truck told the deputy Fowell must have thrown something out of the truck. She was found to have a parole warrant and was arrested. The two men were also arrested for warrants.

While searching the truck, the officer found a clear and red container that allegedly had residue in it as well. The male from the truck reportedly said it was from his daughter’s science experiment and the crystals were made during a volcano experiment.

He also said there was another full container in the back seat.

The back seat had a clothes hamper full of clothes and as the officer searched, he allegedly found numerous pieces of paraphernalia including pipes for the consumption of methamphetamine, a large number of baggies and a scale.

The other plastic container was reportedly full of a clear crystal-like substance, similar in appearance to methamphetamine.

Then, under the container was a cloth bag with a loaded Walther P-22 pistol. Also inside the bag was a container with used syringes and a glass vial of crystals and a baggie of clear crystals.

Folwell was indicted Wednesday on a charge of unlawful possession of a firearm by a felon for the June 27 incident.

In addition, the towed suburban was reported as stolen out of Orange County.