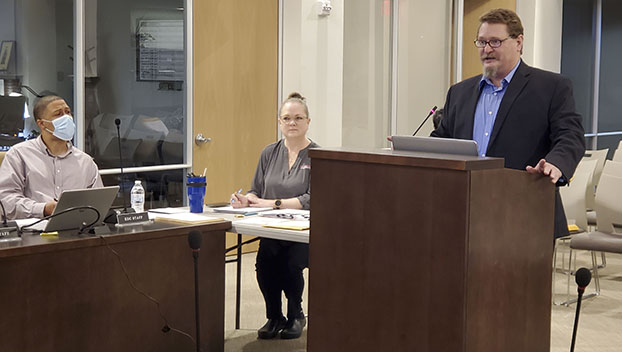 As of Monday, there is no longer self-training for commercial licenses in the state of Texas.

And that, said Dr. Ben Stafford, will be a big issue in this area with the amount of small businesses using commercial drivers.

The vice president for Workforce and Continuing Training at Lamar State College Port Arthur went before the Port Arthur Economic Development Corporation board this week with the news of the new entry-level driver training regulations, which is overseen by the Federal Motor Carrier Safety Administration. 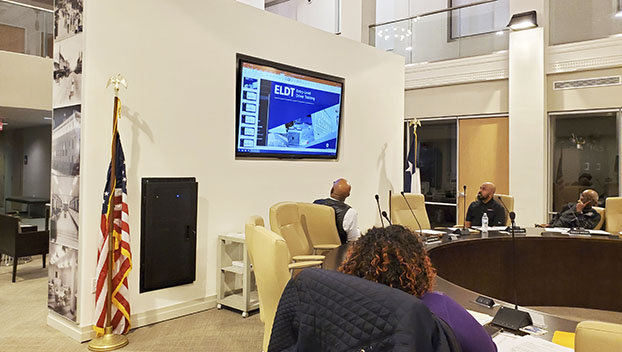 PAEDC board members view a presentation about a change to commercial driving licenses. (Mary Meaux/The News)

These new regulations, which cover classroom and behind-the-wheel instruction, are to ensure entry-level drivers receive the knowledge and skills necessary to safely operate a commercial motor vehicle, according to information from the agency.

The new regulations affect anyone seeking a Class A or Class B commercial license or those seeking specific endorsements such as for school bus, passenger bus and hazardous materials. Dump truck drivers would fit into the latter endorsement.

All entry level training facilities must register with the administration and self-certify that they are meeting the criteria of the new curriculums.

“Anyone who does not register can no longer teach commercial driving in the United States,” Stafford said. “Our college has a registry, and effectively what this means is all self training stops.”

The amount of training also changed. Lamar State currently teaches 40 hours of theory training, which will move to 60 hours.

Stafford said they are also increasing the behind-the-wheel portion of the class by 40 hours, moving the number from 260 to 300 hours.

“We will be offering separate classes for the new endorsement,” he said. “Historically, there was no specific curriculum for training and endorsements. You simply took the driver’s manual, took a moment in the evening and study, and you were able to go and sit for the test. Now, you must study according to the new curriculum, and the entry level training provider must certify that you pass this material.”

A person can take their theory training from a different provider than the one who teaches behind the wheel. Stafford said this is something the Federal Motor Safety Carriers wanted because it creates a learner’s permit that travels throughout the United States.

Stafford said the college is hearing from a lot of major driving companies who have historically trained their own drivers but will not be training them in the future. Lamar State is in talks with Coca Cola for training and speaking with Budweiser, as well.

“It’s a major change to the driving industry,” he said.

Port Arthur Economic Development Corporation Board Member Rashad Harris asked Stafford if a CDL driver is responsible for the hazardous materials being transported.

The driver, Stafford said, would be required to review the packaging and make sure it is adequately stored in the vehicle. This also means the driver must know how to safely store the materials.

Board Member Beverly Raymond asked Monday why they were just learning of the changes on the day they went into effect.

Stafford explained the changes were authored in 2016 for implementation in 2019. The rules were published, and then each state then had to interpret the rules.

After the final session the governor told the DPS, which does the licensing, that the state would honor it even though it did not go through the legislature.

DPS then informed the college because they are a third-party examiner and a state agency, he said.